Not long ago, a team of legislators led by Nelson Dollar introduced a bill making it illegal to crack down on law enforcement officers seeking to enforce immigration laws.  If you do something that interferes with a lawman’s efforts to enforce the law, you are likely guilty of something called obstruction of justice.  THAT is already on the books.  (Not quite sure why we need a new law addressing something that is already illegal.)

Well, ol’ Nelson is back.  Here he is on Twitter: 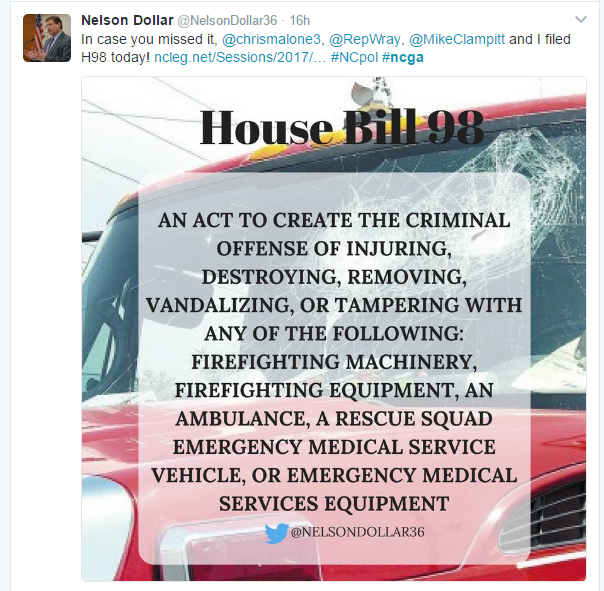 Okay.  All that looks like vandalism and theft.  Stuff that is already illegal.

Once again, we’re introducing legislation outlawing stuff that is already illegal.   Meanwhile, the state employee health and pension funds are about to implode.  Our certificate of need laws are still unnecessarily inflating health care costs from Murphy to Manteo.  Taxes are still too high.  And we’ve got all kind of sketchy monkey business going on at Appalachian State and other UNC campuses.

Is Nelson simply not paying attention?

This rush to make everything under the sun illegal wins politicians kudos in the media and brownie points with voters.  But it also muddies the waters in the judiciary, and creates more of a red tape hassle for the men and women who have to enforce all of this stuff.  (How do you absolutely determine lawful vs. unlawful “removing”?)  It also does a number on our personal freedoms.  Introducing bills criminalizing stuff that is already illegal also wastes time and resources within the legislature.

2 thoughts on “#ncga: Outlawing stuff that is already illegal”