You know those folks I am talking about.  They are the ones who have done a horrible job for years keeping the people of North Carolina informed about the happenings in the

legislative building.  They are all so busy brown-nosing Democrat legislators for press secretary jobs in the Cooper administration.  These are the folks who creep and lurk and stalk Republican politicos’ social media accounts — in search of shares and retweets they can twist into UNDENIABLE evidence of knuckle-dragging bigotry.

Well, this bunch of sweethearts commonly known as the legislative press corps has founded a Twitter account called “NCGA_FUBAR.” (I am suuuuuuuure it is just a coincidence that it showed up during the GOP reign on Jones Street.  *The place certainly wasn’t FUBAR back when the speaker — whatzisface from Matthews — was accepting cash in brown paper bags in the Waffle House men’s room now, was it? *

It sure is interesting to see these gutless wonders — who all claim to be unbiased observers — laying out their nasty comments against Republicans under a pseudonym.  In fact, here we have Laura (“Did you know I am a LESBIAN?”) Leslie from WRAL adding her contribution to the childishness: 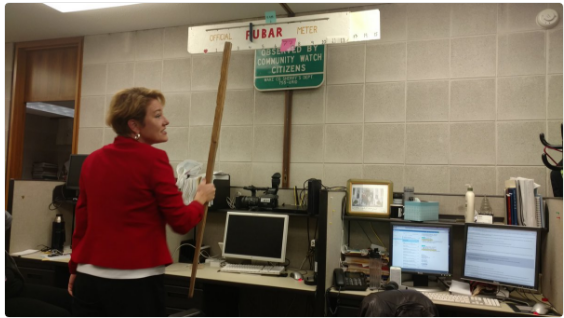 u are wondering, Miz Leslie is manipulating a display in the legislative building’s press room that supposedly indicates how FUBAR the legislature is at the moment (in the opinion of the dwindling capitol press corps).

Yes, this is the same slouchy, lumpy hairy roller derby queen who delighted us all with public acclamations on Facebook that Christian

supporters of HB2 were responsible for the massacre at the gay nightclub in Orlando.  (She also threw out a little blame to the “crazy MFers with guns”.)  She and her hag, Mr. Binky., also managed to slam the Republican presidential field last year while on duty.  Binky gained notoriety a few years back for publishing the names and addresses of all the concealed carry permit holders in North Carolina.  He also mused on Twitter about trading Watauga County to South Carolina.

One thought on “#ncga: Our cute, cuddly FUBAR drivebys”