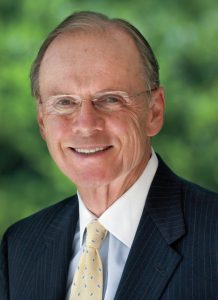 again.  I called them out once already for going over the top.  Now, they’re just really reaching and stretching, and, and, and ….(*SIGH*)

Let’s look back at a fellow named William Brisson.  He was a rather moderate Democrat from Bladen County who increasingly voted with the Republicans.  Finally, he pulled the trigger, switched parties, and helped pad the GOP majority.

Ken Goodman is a Democrat from Richmond County — a locale that is slowly but surely shifting rightward. (Despite the D next to his name, he LOOKS like ought to be hanging out with John Hood and Art Pope.)

Instead of cultivating Mr. Goodman, and possibly getting him to pull a full-Brisson, the political operation has opted for name-calling.

Let’s look at some data to see what the GOP House caucus thinks is RADICAL.   For 2017,  Goodman received a ranking of 50 from Civitas, which made him the most conservative member of the Democrat caucus.  By comparison, Nelson Dollar ended the year with a 60 rating.  Ol’ Nelson chairs a powerful committee and is arguably one of the most influential members of the House GOP caucus and the House as a whole.

(*Maybe all those Rs actually stand for “Radical”.*)

In 2015, Goodmon scored 51.9, which made him more conservative than William Brisson (then-D but now R) and a whisker to the left of Leo Daughtry (R).

If Goodman is a Radical Leftist, then it appears the GOP caucus has been infested with quite a few of his ilk.  (*Get to work weeding them out, fellas.*)