Some of the more interesting names are highlighted.  John Blust and Justin Burr are alleged conservative stalwarts — rebels.  Both of them have been banished to leadership’s doghouse for years.  Yet, here they both are — tucking tail and submitting.

I figured some of my friends in neighboring Lee County would be interested in seeing John Sauls’s vote.  Sauls is a Baptist preacher.  In his prior term in the House, Sauls earned some conservative ire by backing community

Now, he’s voted to repeal a bill that was likely quite popular with a lot of Baptists in the state.  It’s kind of a strange vote for a guy who has voted against other legislation because it involved legal liquor sales.

That’s roughly HALF the GOP caucus opposing their speaker on this.  Moore County’s Boles and McNeill did the right thing here.   So did conservative stalwarts Chris Millis, Larry Pittman, and Michael Speciale.  (Who the hell knows what happened to Blust and Burr.)

Now let’s look at the Senate side:

It’s interesting to see freshman Danny Earl Britt of Lumberton voting to repeal HB2.  He was elected in a historic, record year for Robeson County Republicans.  Observers on the ground in Robeson found HB2 to be a HUGE factor in the Republican success there.

And look at Jerry Tillman voting to repeal HB2.  Go ahead and add this to his list:  sponsoring a bill hurting Moore County schools, the “campaign office” on the Raleigh golf course, and his bromance with the solar welfare crowd.

And here are the heroes in the Senate caucus: 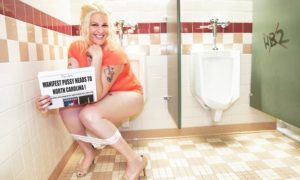 It was interesting to see Chad Barefoot — a true love of the religious right — taking a walk and missing this vote.  The senator representing Franklin Graham’s Samaritan’s Purse — Deanna Ballard — also took a walk and missed this vote.