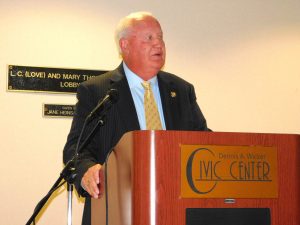 Meet The New Boss.  Same as the old boss.

Folks in Lee and Harnett counties who thought they were voting for a change in 2016 DID NOT GET much of one.  They traded a Democrat House member, Brad Salmon, for a Republican named John Sauls.   If you check the Civitas conservative rankings, there really has been little difference between the two.

Compare all of that with Sauls in 2017.  Sauls was in a 28-way TIE for 29th place with a conservative ranking of 73.3 percent.  That ranking tied him  with Speaker Tim Moore (R), Harnett’s David Lewis (R), and Pitt’s Murphy (R) among others.

So, what do we take away from all this?  You can make it all about R vs D when you go to the polling place.  But picking R does not always guarantee you’re choosing conservatism. Or a radical difference from the Democrats, for that matter.

2 thoughts on “#ncga: HD-51’s Sauls about as conservative as his Dem predecessor”