Senate Rules Committee chairman Bill Rabon took a hit from WBTV’s Nick Ochsner — the only member of the capitol press corps worth a damn — and Bob Rucho was not happy:

First of all, it’s a shame that Rucho has taken the four-year old-on-the-playground route.  Mocking someone’s last name.  Really?  (Talk about unbecoming for an elder statesman.)

Second — the NC Senate is not an employment agency.  Neither is state government.  Conservatives should be focused on cutting regulations and backing government out of our lives so we can be free to make the best choices possible for ourselves and our families.  THIS is handing out goodies to friends and campaign contributors — just like Thom Tillis’s I-77 toll road — at our expense.

misses the bigger picture.  The architect and engineer lobby has used its political pull to craft state regulations and laws to e 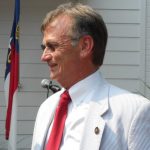 nsure perpetual job security.  The current competitive bid process for government construction projects is set up to enrich the designers and shut out any sort of cost-savings like design-build.  Design-build is growing in popularity in the private sector.

In competitive bid projects, the architects and engineers dream up something intheir head and put it on paper.  That paper then goes out for bids.  The cost ends up being whatever the compe 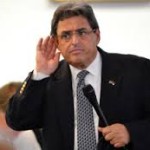 titive bidders come back with.  And the designers get SIX PERCENT or more of the final cost.  No matter if it is $100,000 or $100 million.  There is little to no incentive to keep the cost down.  And most architects and engineers have little to no training on construction cost estimating.

or more.  Outrageous state and federal regulations on the construction industry — RED TAPE – almost make stuff like that a necessity to avoid losing your shirt building a government project.

will not get anywhere near state construction projects.  State law does not allow for licensed architects to either work for a construction firm or even own a financial stake in a construction company.  (They can contract as a consultant with a construction firm.)  Never mind that design-build projects regularly end up being more cost-effective than competitive bidding.  A lot of PAC money is being spent to keep a lot of architect and engineer firms afloat and feeding at the government teat.

If you really want to save money, open things up to allow for more design-build in government projects.  But – with a VP of a major architecture firm that has made a killing off of state government over the years sitting in the lieutenant governor’s chair — I won’t hold my breath waiting for that.

2 thoughts on “#ncga: circling the wagons, trying to pass off cronyism as “conservative”, giving the A/E cartel a “pass””