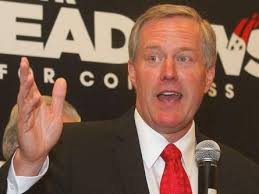 Ah, the plot thickens.  Just as it looked like Mark Meadows was setting Wayne King up for a congressional seat,  the drive-bys in   DC come up with a new angle:

Rep. Mark Meadows’ shock retirement — revealed just 30 hours before the filing deadline in North Carolina — has roiled some Republicans in the state who suspect he timed his announcement to benefit a friend of his wife.

The four-term congressman will depart the House for an as-yet-undefined role with President Donald Trump, a decision he disclosed in an interview with POLITICO Playbook that published around 5:30 a.m. on Dec. 19, ahead of the filing deadline at noon on Dec. 20.

Later that day came a campaign launch by Lynda Bennett, a local GOP activist and real estate agent who is friendly with Debbie Meadows, the congressman’s wife, according to sources who know both women.

Wary Republicans in the state quickly speculated that she had advance notice of Meadows’ retirement.[…]

And chief of staff Wayne King DID NOT?

[…] Online records revealed her campaign website domain had been registered on Oct. 28 by a Scott Meadows, who appears to be the brother of the congressman.The campaign’s Facebook page was created on Dec. 18, a day before the retirement. And shortly after midnight on Dec. 19 — about five hours before Meadows announced — Bennett posted photos of herself with the congressman and his wife at local GOP events in the state.

[…] After launching her run, Bennett was quickly endorsed by the Asheville Tea PAC, a local organization which said in a release that its board convened for a 6:15 a.m. conference call on the day of Meadow’s announcement to throw support behind a successor.

“It doesn’t take a genius to figure out how this happened. It just doesn’t,” said Jeff Miller, a city councilman in Hendersonville,who was the 2010 GOP nominee in the district. “It just looks very suspicious.”

“It was very discourteous to other Republicans who were respecting Congressman Meadows and not primarying him for him to pull out this close to it and leave everybody in a lurch,” Miller said.

Ultimately, a dozen Republicans filed before the deadline, but the field is notably devoid of local politicians who would typically flock to an open-seat race.

While Meadows’ announcement came before the final deadline, it was two days after the deadline for candidates who had already filed for one office to withdraw and switch to another office, boxing out any state legislator in the district who had filed for reelection but harbored congressional ambitions. The only North Carolina lawmaker running is state Sen. Jim Davis, who had not filed for reelection to the General Assembly because he was planning to retire.

“Mark is held in high esteem,” said Aubrey Woodard, the chairman of the 11th District GOP organization. “Since this has hit, my phone has been ringing off the hook from people who are upset and discouraged.”

The timing of Bennett’s announcement raises “great suspicion,” Woodard said, though he stressed he had no proof of inappropriate favoritism. He said he expressed his concerns to a Meadows’ staffer and asked that the congressman refrain from endorsing anyone in the race.

Through a spokesperson, Meadows’ congressionaloffice declined to comment for this story.

Debbie Meadows recently founded and serves as the executive director of Right Women PAC, an organization that plans to play in “primaries in Republican districts” to elect more GOP women who align with the House Freedom Caucus.

The congressman’s wife appears to be supporting Bennett’s bid, though she has offered no formal endorsement. Debbie Meadows was slated to introduce Bennett at a meet-and-greet event on Saturday in Hendersonville, according to an invitation obtained by POLITICO.

And the two were together at an early October GOP fundraiser in Hendersonville, where Debbie Meadows remained near Bennett for much of the event, introducing her to donors and other attendees, according to a person at the fundraiser.

Reached last week in a brief phone call, Bennett declined to be interviewed and asked if questions could be sent via email. She did not respond to the email containing POLITICO’s questions.

Meadows’ plans were kept so secret that Wayne King, the congressman’s deputy chief of staff and district director who has been eyeing the seat, did not learn about the retirement until shortly before the public announcement. He said he was asked to break the news to the district staff on Dec. 18, a Wednesday and the day the House voted to impeach Trump.

“The first I heard anything about it was late Tuesday evening,” said King, who resigned from Meadows’ office and filed to run on Dec. 20. He said he was not deterred by the short timeline. “I don’t expect anyone to hand me anything. I’ve always been a worker and a warrior and a fighter.”

Privately, some state legislators are grumbling that, had they known Meadows was planning to retire, they might have been able to save Rep. Mark Walker (R-N.C.), according to people who have spoken with lawmakers. Walker’s Greensboro-area seat was sacrificed last month in court-prompted redistricting. Walker then spent weeks threatening to primary several members of his own state’s delegation before announcing he would retire and prep for a 2022 Senate run.

“Meadows screwed everybody,” said one GOP operative in the state. “About 15 percent of the General Assembly is out there in the mountains. They have all been eyeing that seat and figured they had two more years. And the rest of the Republicans in the Assembly are furious because they threw Mark Walker off the boat, and they didn’t have to.”

In announcing his retirement, Meadows said he never planned to stay in Congress long-term.

Meadows has also not ruled out resigning before the end of his term,which could prompt a special election next year.