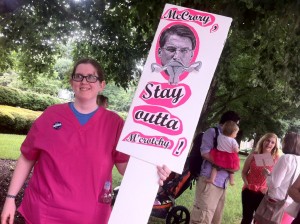 If you believe McClatchy and Bill Barber’s zip-tie crowd (or the “eye candy”  pictured with this post), the GOP-dominated state legislature is preparing to strip North Carolina’s women of their God-given rights and put them ALL at risk of death, disease, and dismemberment.

Back when I was in the drive-by media, I was often amazed at some of the really stupid questions my colleagues would toss at their interview subjects.  McClatchy’s Rob Christensen is keeping that proud tradition going with his,um, “reporting” on the abortion legislation currently being debated on Jones Street:

[…]Asked whether he viewed the abortion bill as primarily dealing with women’s safety or restricting access, McCrory said: “I think parts of the bill, personally, deal with safety and help protect these women as have been seen in Durham. But I also see that there are parts of the bill that clearly cross that line that could add further restrictions to that access. I think that is where we need further discussions and further debate.” […]

It’s too bad that Gov. Pat took McClatchy Rob seriously.  I wish he would have taken the Don Rumsfeld route with Rob. Rummy — when he was GWB’s defense secretary — would let a reporter have it when he or she dared to ask a really stupid / biased question.  Rumsfeld would have fired back at Rob with something like: “Are you stupid, or just intellectually challenged?”

Rob & co. make their lefty masters SO happy by peppering their copy on this abortion legislation with the word “restrict”.  They don’t bother to tell you much about what the bill really says or does.  The North Carolina Values Coalition DOES, however.   Let’s review some of the “harsh”, “restrictive” requirements that have Rob experiencing his “special” time of the month:

*Scary* stuff, huh? Rob & co. can’t afford to have you clued in on details like this.  If you were, you’d recognize them for the fools and liars that they are.

It’s also unfortunate that Gov. Pat is waffling on supporting this very reasonable legislation.  (Of course, at one time, he was dismissing efforts to back out of ObamaCare, calling it ”the law of the land.” Then, the grassroots went to work on him, and his mind was changed.)