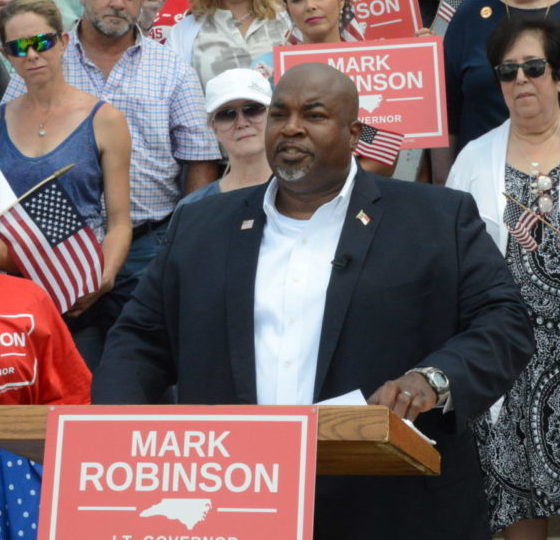 As one of ten children growing up in extreme poverty in Greensboro, NC, Mark Robinson has defied a lot of odds in life: an alcoholic and abusive father, foster-care stints, and an overwhelmed single mother.

After joining the Army Reserves right out of high school, he married and had two children while drifting through various jobs making furniture, a profession that kept evaporating as each plant he worked for relocated to Mexico.

In 2018, he attended Greensboro’s city council meeting to voice his frustration over the town’s decision to ban a local gun show, and found himself giving an off-the-cuff yet deeply impassioned speech. Despite not owning a gun at the time, Robinson argued for four minutes in defense of the Second Amendment and ended up garnering national attention. This year, with few resources and no electoral experience, Robinson became the first black lieutenant governor-elect of North Carolina.

“I didn’t expect the reaction that I received from that speech,” Robinson said. “I thought maybe a couple of friends would see it and that was about it. When it went viral …?a lot of people encouraged me to get a radio show and things of that sort.”

But he decided against courting fame, because “in order to affect real change, there’s no better place to do that than in the political arena.”

So Robinson ran for lieutenant governor, and became the first black Republican to win a major seat in the state since William Woods Holden in the 1800s. He also earned more votes in his state than the two top Republicans on the ticket: President Trump and Sen. Thom Tillis, and nearly as many as Democratic Gov. Roy Cooper, who will now have a member of the GOP as his second-in-command. If Cooper is successful in his rumored run for US Senate in 2022, Robinson will ascend to the state’s highest office.

Robinson’s win is astounding for any number of reasons, but especially because he managed to beat the $8 million spent by former New York City Mayor Michael Bloomberg in his state to take him out.

The funds came via the Beyond Carbon Victory Fund, an environmental justice campaign Bloomberg launched last year that boasts a $500 million budget dedicated to electing state and local candidates “who are climate champions.”

In his upcoming role as the new lieutenant governor, Robinson will chair North Carolina’s energy council.

Of Bloomberg’s bid to turn his ticket blue, Robinson is matter of fact.

“Just because you have money, that money does not always translate into votes,” he said. “Our message was simple: We’re 100 percent pro-life; we stand up for our Second Amendment, our God-given right to self-defense, school choice, caring for our veterans and standing up for law enforcement and law and order.

“You just can’t sway people because you want them to think the way you do. People see right through that.”

In short, Robinson was just a guy who resonated with people, connecting with them on issues they face every day. His message might have ruffled the feathers of the politically correct, but no one could ever doubt its authenticity. He never assumed he knew better, a mistake Bloomberg made with both his fly-by-night run for president and his push for more progressive candidates in smaller races across the country.

“If Michael Bloomberg’s failure to have any impact on the 2020 race tells us anything, it shows message and messenger are more important than money,” said Paul Sracic, political science professor at Youngstown State […]