North Carolina Republicans have been subjected to all kinds of rhetoric about the fundraising prowess of one Dallas H. Woodhouse and his grandpa.  Keep reelecting them to run the state party, and they will guarantee — with their awesome skills — to keep the cash rolling in.

Well, the party’s campaign  finance reports, specifically the 2017 semi-annual year-end report, tell a story Dallas and Grandpa may not want you to hear.   (Click the images below to enlarge.) 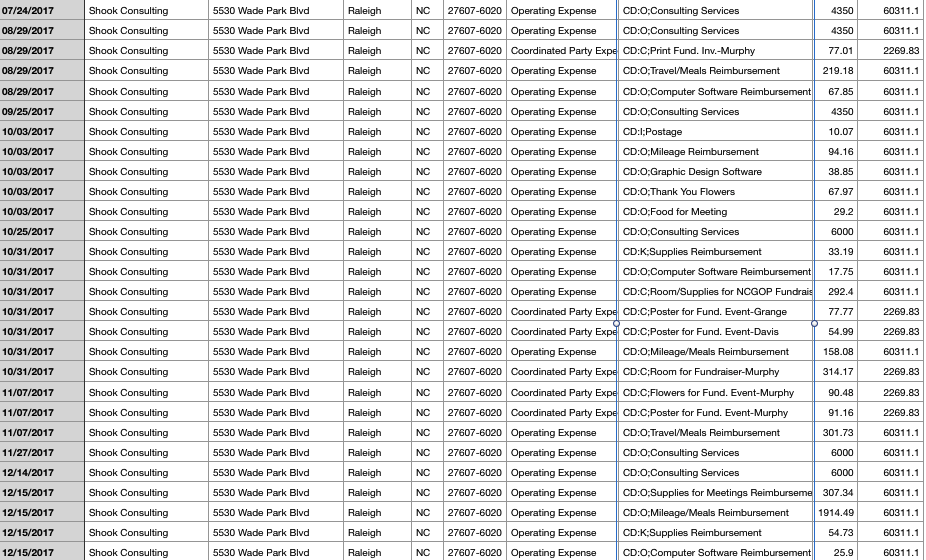 Shook Consulting is a well-connected fundraising consultancy that specializes in raking in cash for Republican candidates and organizations.  From July 2017 to December 2017, the state party paid Shook over $60,000.  Not bad for six months work with ONE CLIENT.

Hold on. It gets better:

Consilium Connect is also a fundraising consultant.  Between August and November of 2017, this consultant got paid over $35K by the NCGOP.  Again, NOT BAD for three months work for ONE CLIENT.

This begs the question: WHY do we need Dallas and his grandpa?  ANYBODY can hire “fundraising consultants.”  ANYBODY.

Fundraising has been this dynamic duo’s main selling point in their campaign to maintain control of the NCGOP.