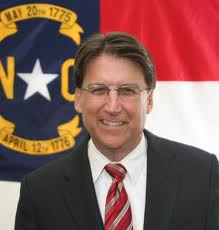 Yep.  You read that right.  The Charlotte Observer has the details:

But his opponent, Democratic Lt. Gov. Walter Dalton, said the indictment of Rep. Stephen LaRoque makes it harder for McCrory to criticize a Democratic “culture of corruption.”

“It’s harder for (McCrory) to say that with a straight face given what’s going on,” Dalton told reporters. “There are examples in both parties … that neither side should continue.”

The question came up after both candidates spoke to the North Carolina Trucking Association in Ballantyne.

Dalton was asked by a reporter about GOP efforts to brandish a “culture of corruption” label against Democrats in light of recent incidents involving legislative staffers and LaRoque. Laroque, of Kinston, was indicted on federal charges of theft and money laundering involving his management of more than $7 million in federal funds.

Tillis, a Cornelius Republican, has urged him to resign.

“I’m very pleased with Thom Tillis,” McCrory said. “That’s the type of leadership I will demand as governor.”

Pleased with Thom Tillis ????   Leadership?  It took MONTHS of browbeating from Joe Hackney, bloggers AND grassroots activists to get Thom to finally move.    The indictment from the federal grand jury made it harder to continue the stall technique.   How much leadership — or courage — was involved to wait until the session was over, and the primaries were done, to ask for LaRoque’s resignation?

Holy Cow.  THIS is an example of the kind of stuff that makes Barbara Howe’s poll numbers go up.  I feel like I’m  reliving that godawful 2008 election between Elizabeth Dole and Kay Hagan.  (Makes sense.  Pat has basically THE SAME TEAM working for him that ran THAT masterpiece.)

You know you’ve screwed up when you’ve got me agreeing with Walter Dalton.  The sleaze issue is not a Democrat or Republican problem.  It is a RULING CLASS, ESTABLISHMENT problem.  We have people in both parties who REALLY ENJOY being called “Mr. Chairman” and/or “the honorable gentleman”,  being fawned over by lobbyists, and spending other people’s money.   McCrory and Dalton are both part of this problematic ruling class.

If  WE THE PEOPLE want to straighten out our economic mess we’ve got to weed these people out.  Get rid of the people who ENJOY political life in Raleigh and DC and replace them with people who actually care about restoring some sanity to this country’s operations.

One thought on “McCrory “pleased” with Thom Tillis”