John Hood and Chris Fitzsimon don’t just team up on NC Spin.  They are also doing it more and more on state policy matters:

A coalition of policy and advocacy groups renewed their efforts to convince the General Assembly to set up an independent redistricting process based on a model adopted in Iowa as a means of ending partisan gerrymandering.

The Iowa redistricting model empowers the nonpartisan legislative staff to draw the congressional and legislative maps. It emphasizes compactness, and doesn’t allow the staff to take incumbency or partisanship into consideration.

The appeal to lawmakers came hours before the 2017 General Assembly was set to begin its long session, and it’s likely to face a skeptical reception.

portion of the press conference.

“I think a lot of the merits that are portrayed that the Iowa plan brings — reduce litigation, better product, more participation, more people running for office — frankly just don’t bear out,” Lewis said. “If you look at the number of unopposed seats in Iowa, the legislature, it was roughly comparable with what we had here.”

Backers of the plan argue that now is the best time to establish a nonpartisan process for redrawing congressional and legislative maps.

“Demographics have changed and no party knows exactly where those demographics are going to land in 2020 and after that,”said Rick Glazier, executive director of the liberal N.C. Justice Center and a former state representative. “The best time to do redistricting reform is always going to be when there are questions for either side.”

Mitch Kokai, senior political analyst at the John Locke Foundation, noted that redistricting has attracted recent headlines in North Carolina. On Tuesday, the U.S. Supreme Court issued a stay of a lower court’s order for the General Assembly to redraw legislative districts by March 15 and to hold elections under those new maps this fall.

and constitutional, but also bad,” Kokai said. “Just because the lawmakers can draw the districts the way they have doesn’t mean that they should.”

Lewis said it’s “either naïve or disingenuous” to say that anything can truly be nonpartisan. 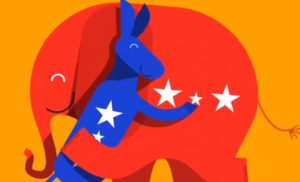 10 thoughts on “Locke Foundation teams up with a bunch of libs. (Um, Yay.)”