In a written statement (and ensuing interview with a WUNC driveby) state Rep. Duane Hall is firing back and defending himself with both barrels: 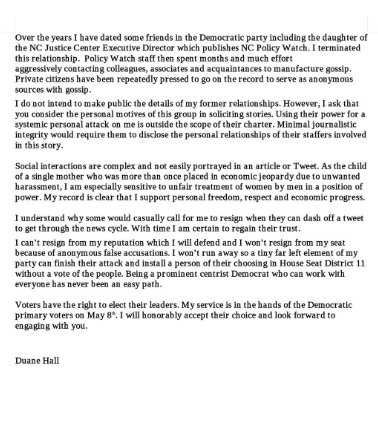 In earlier reporting, we mentioned that the “hit” on Hall originated from his side of the political aisle.  We had our suspicions about the

culprit, and Hall all but confirms them in his statement.   The executive director of the NC Justice Center, mentioned in  Hall’s statement, is former state Rep. RIck Glazier (D-Cumberland).

Hall appears to suggest Glazier is using his position to sic NC PolicyWatch on him as part of a personal vendetta.

If true, it sounds like a clear-cut example of malice which would nicely complement a libel suit. (*Couldn’t happen to a,um, **nicer** bunch of people.*)

I agree with Hall. Let his voters decide if he behaved inappropriately and no longer deserves to represent them.