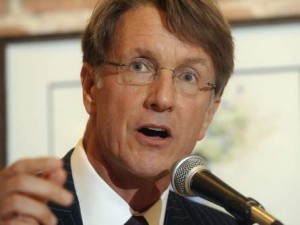 While the state House leadership is talking about watering stuff down, slowing things down, appeasing the Democrats to “get stuff done,”  at least one state Senator is out there slugging away on behalf of principle and DOING THE RIGHT THING.

Senator Thom Goolsby (R-Wilmington) has stepped forward to push for a total repeal of the atrocious Racial Justice Act.   (During the previous legislation, House majority leader Skip Stam and Speaker Thom Tillis pushed through a watered-down version of the bill.)

Supporters of the RJA — mainly defense attorneys and lefty activists — say the bill protects people from being sentenced to death when it gets determined that race played a major role in their sentencing.  So far, FOUR defendants on death row have had their death sentences overturned under this law.    HERE is one of the most outrageous examples.

A friend of mine — an elected prosecutor, and Democrat — told me the story about being called by his state senator, also a Democrat, seeking input on the legislation.  My prosecutor friend unabashedly slammed the bill and pleaded with the senator to vote against the RJA.  The senator thanked my friend for his input, giving the impression that he would vote against RJA.  Next thing you read — the senator had joined the senate’s Democrat majority in passing this atrocity.

The title of legislation can often be a boon to lefties trying to pass outrageous legislation.  Violence Against Women Act?  Racial Justice Act?  How do you vote against those and survive the ensuing  headlines and attack ads?

The RJA was a bone tossed to the trial lawyers and the William Barber-esque race-baiters.  It is a stealth method for killing off the death penalty.  Imagine the nightmare these murder victims’ families are going through.  You got a death conviction 15 years ago. You’ve moved on with your life, and now you hear that some lefty judge has taken the scumbag off of death row and ensured the taxpayers will be supporting him for the rest of his sorry life.   The death penalty is only a deterrent if there is a serious threat that it will be carried out upon a guilty conviction.

In this era of “slowing down” work on voter ID and other wildly-popular legislation, it is refreshing to see legislators like Thom Goolsby courageously stepping forward to DO THE RIGHT THING and ENSURE JUSTICE IS ACTUALLY SERVED (regardless of race).

2 thoughts on “Kudos to Goolsby on Racial Justice Act”