We came across this on social media: 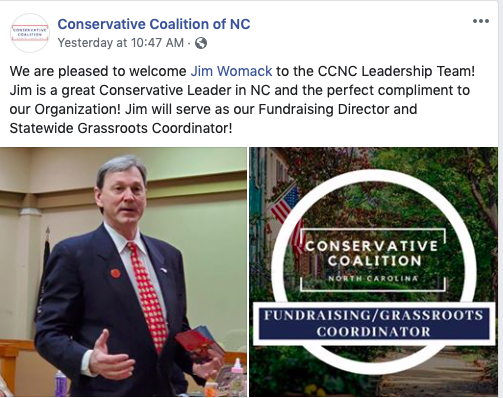 The Conservative Coalition of North Carolina appears to be the end-result of a merger between three major Tea Party activist groups in western North Carolina.  With the addition of Womack from the eastern part of the state, they appear to be making it clear they plan  to  expand statewide.

I understand they’re new and getting used to each other.  But I noticed on their “candidates we support” page that they’re supporting state Rep. Josh Dobson for Labor Commissioner.  Dobson spearheaded the passage of HB184, which attempted to cripple state treasurer Dale Folwell’s ability to manage the state health plan.

Dobson also had a little issue with spending his campaign funds on “international travel for legislative duties.”

3 thoughts on “Jim Womack’s NEXT chapter”