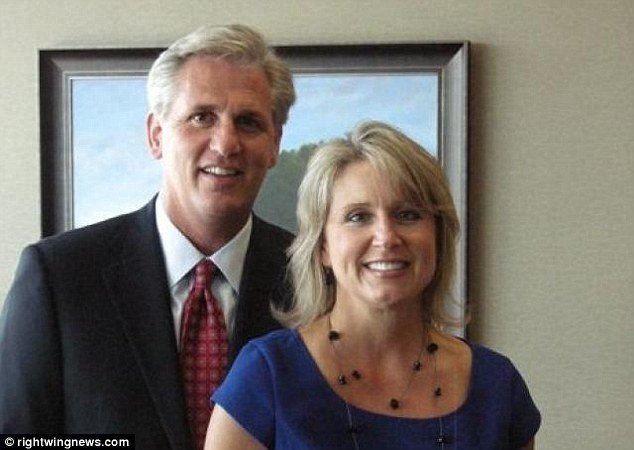 If you believe what you see and hear on the drive-by media, Rep. Kevin McCarthy (R-CA) is a changed man.  The aspiring House speaker has been promoting a sequel to ‘The Contract with America’ from the 90s, and mouthing platitudes that might sound good to the average grassroots conservative out there.

But he and his cronies could not control themselves from telling the truth recently  to, of all things, The Washington Post:

Rep. Madison Cawthorn (R-N.C.) made a name for himself as a firebrand social media phenomenon who delighted in trolling the left, famously boasting to colleagues that he had built his House office by focusing on communications not legislation.

But the strategy made him vulnerable to forces within his own party that helped end his time in office. Top allies of Kevin McCarthy, the House Republican leader, worked this spring to deny Cawthorn a second term in office, after the Donald Trump-endorsed lawmaker made controversial comments about cocaine use and sex parties in Washington that led McCarthy to announce he had “lost my trust,” according to multiple Republicans briefed on the effort, which has not been previously reported.

GOP lobbyist Jeff Miller, one of McCarthy’s closest friends and biggest fundraisers, and Brian O. Walsh, a Republican strategist who works for multiple McCarthy-backed groups, were both involved in an independent effort to oppose Cawthorn as part of a broader project to create a more functioning GOP caucus next year, said the Republicans, who like others spoke on the condition of anonymity to discuss private conversations. […]

Regardless of what you think about Cawthorn personally, he voted right. And he didn’t deserve to have his own “leader” dispatching cronies to shove knives in his back during a primary election.

[…] Targeting Cawthorn was part of a larger behind-the-scenes effort by top GOP donors and senior strategists to purge the influence of Republican factions that seek disruption and grandstanding, often at the expense of their GOP colleagues. The political machine around McCarthy has spent millions of dollars this year in a sometimes secretive effort to systematically weed out GOP candidates who could either cause McCarthy trouble if he becomes House speaker or jeopardize GOP victories in districts where a more moderate candidate might have a better chance at winning.

The allies close to McCarthy have sometimes taken steps to conceal their efforts, as they did in the Cawthorn case, with money passing from top GOP donors through organizations that do not disclose their donors or have limited public records, federal disclosures show.[…]

Kinda like the shadowy, DC-based “Good Government” organization that dropped $600k to benefit the  NCGOPe endorsed judicial candidates back in May.  No names, no employer info.  No addresses.  Nothing but the ironically-named “Good Government” group name.

By the way, senator Thom Tillis was a key figure in managing a RINO PAC that was opposing Cawthorn’s renomination.

McCarthy’s own approach to enforcing unity within his sometimes fractious Republican caucus has been more aggressive than his two immediate predecessors, Reps. John A. Boehner (R-Ohio) and Paul D. Ryan (R-Wis.), whose tenures in leadership were marred by dissent and dysfunction. McCarthy has spoken publicly about the need to not just win a majority in the House, but to make sure his party wins “a governing majority.”

“We’re coming out with solutions. If we’re unified in that, even if we have a small majority, we’d be very strong in being able to pass it,” McCarthy said at a March House Republican retreat. “So we want the idea to be so strong that you overcome all the politics that people bring.”

McCarthy has a reputation for caring about politics over policy, but ultimately his fate may lie in the hands of one person: Trump. If Republicans win a small majority in the House, Trump could likely influence enough votes to determine the speakership, GOP strategists say. It’s a major reason McCarthy allies say he has remained close to Trump even when he has grown frustrated with him

Several Republican members of the House have applauded the efforts to bring more pragmatists into power who will prioritize passing conservative policies over the more disruptive tactics of the House Freedom Caucus. That group of far-right lawmakers has asked for rule changes in the next Congress that would increase their leverage over the rest of the caucus.

“One subset lives in reality, the other subset does not,” a Republican member of Congress concerned about the Freedom Caucus said.[…]

It’s AMAZING that you get labeled ‘extremist’ for supporting the party platform.

[…] Behind the scenes, some of the party’s top donors have worked with McCarthy’s allies to further the project, while taking steps to obscure their direct involvement in more controversial races.

“McCarthy is a political animal, and he has a lot of political animals working for him,” said a Republican operative close to several prominent donors who is familiar with the broader effort. “He is not a guy to be trifled with. It’s like they say in the Marine Corps, ‘No better friend, no worse enemy.’ And they mean it, and they act on it.”

McCarthy allies argue that their interventions in GOP primaries have little to do with political ideology, but rather focus on elevating politicians who will work with the rest of the Republican caucus or who have the best chance of winning their district. The Bakersfield, Calif., Republican has recently embraced some of the most far-right members of his caucus, including Rep. Marjorie Taylor Greene (R-Ga.), whose committee assignments he plans to restore if Republicans win the House

Much of the spending in Republican primaries by McCarthy’s political operation has been done out in the open by the House GOP’s largest super PAC, the Congressional Leadership Fund, for which McCarthy has helped raise $165 million this cycle.

CLF, which is run by Dan Conston, has spent more than $7 million in Republican primaries this cycle, much of it focused on nominating more moderate, and therefore electable, candidates in swing districts. The group also spent millions in attempts to protect incumbents like Michael Guest (R-Miss.), Mark Amodei (R-Nev.), and Jamie Herrera Beutler (R-Wash.), who hail from safer Republican districts, when they faced challenges from more far-right figures.

[…] In an overwhelmingly Republican Texas district north of Houston, CLF and another group founded by McCarthy allies, American Patriots PAC, spent nearly $1 million to help McCarthy favorite Morgan Luttrell beat Christian Collins. Both Collins and Loomer were endorsed by members of the Freedom Caucus, including Greene.

CLF used a different McCarthy-aligned group this summer to intervene on behalf of Herrera Beutler, who earned Trump’s ire by voting for his impeachment in 2021. Kent, her Trump-endorsed challenger, opposed McCarthy as speaker, denied the legitimacy of the 2020 election and denounced the legal treatment of Jan. 6 rioters as “banana republic stuff.”[…]

[…] But in the weeks before the Aug. 2 primary, two groups, WFW Action Fund and a previously unknown group called Conservatives for a Stronger America, began attacking Kent as a closeted leftist, with television ads misleadingly suggesting he wanted to “defund the police” or showing old photos of the former Army Special Forces officer sporting long hair alongside false claims that he supported Sen. Bernie Sanders (I-Vt.).

After Kent defeated Herrera Beutler in the primary, both PACs opposing him publicly reported contributions that tied their efforts to McCarthy’s allies. WFW Action Fund received transfers of nearly $1 million from CLF in the months before the ads.

Conservatives for a Stronger America reported after the primary that it received all its money from a group called the Eighteen Fifty-Four Fund, apparently named after the year in which the Republican Party was founded. That group, in turn, which has spent money on a number of races this cycle, has received funding from three sources, according to federal records: WFW Action Fund, American Patriots PAC and a nonprofit called Common Sense Leadership Fund, which is not required by law to report its donors. Federal records do not connect any of the specific donors to the transfers to Conservatives for a Stronger America.

[…] At the same time, the anti-Kent effort reached outside McCarthy’s immediate orbit for support. After the primary, WFW Action Fund disclosed a July 27 donation of $100,000 from Fix Congress Now!, a PAC that has been otherwise dormant this election cycle. Fix Congress Now!, in turn, had received a $102,450 donation from an affiliated group called Unite America PAC on July 2.

Unite America PAC is affiliated with a nonprofit of the same name that seeks changes to the U.S. election system that would give the nation’s political extremes less power, such as through the use of nonpartisan primaries or redistricting. […]

[…] The complex shuffling of funds through other groups became a pattern in multiple Republican House primaries, where Freedom Caucus-aligned candidates found themselves targeted. A person involved said some of the efforts were coordinated by McCarthy allies. At other times, as in a recent race in Florida’s 8th District, where $1.6 million was spent against Anna Paulina Luna, individual donors decide to intervene on their own.

A group that only came into existence in August, American Liberty Action PAC, spent more than $2.5 million in recent weeks to defeat candidates who questioned the 2020 election and expressed affinity for the Freedom Caucus in their recent campaigns, including Paladino and Sabatini.

[…]“They would have been legislative terrorists whose goal was fame,” said a person familiar with the effort to stop them.[…]

Seriously?  How many of the nimrods up there already don’t have “fame” (and fortune) as their #1 goals?

[…]After Paladino and Sabatini both lost their primaries, American Liberty Action disclosed that it was entirely funded by the Eighteen Fifty-Four Fund and a nonprofit, American Prosperity Alliance, which does not disclose its donors.

Paladino blamed McCarthy and his allies for the spending, which he said only arose because his opponent, Nick Langworthy, made it clear he would be more friendly with GOP leadership.

Sabatini also believed during his campaign that he was being attacked by the Washington establishment.

“Everything is happening behind the scenes, but obviously that is what the money shows,” Sabatini said of the involvement of McCarthy allies. “They don’t want a conservative to win. They want a brainless, spineless robot.”

Trump has so far declined to criticize McCarthy for the primary interventions. People close to both men say they continue to have a close working relationship around House races, despite other tensions, as Trump has prioritized growing the size of the House majority.

[…] As in the case of Herrera Beutler, the efforts by McCarthy and his partners have not always been successful. CLF was unable to defeat Sandy Smith, a pro-Trump candidate in North Carolina’s 1st District who faced past allegations of domestic violence. In Arizona, CLF and WFW Action spent about $1 million to support Republican Tanya Wheeless, only to watch her lose the primary to Kelly Cooper, who has challenged the legitimacy of the 2020 election and promised to seek the release of those arrested for storming the U.S. Capitol.

The Cawthorn race became a concern for McCarthy earlier this year, when the freshman member told a podcast about seeing cocaine use in Washington and being invited to sex parties. After meeting with McCarthy over the statements, Cawthorn blamed “the left and the media” for trying to use his comments to divide the GOP. His office did not respond to a request for comment for this article.

In the weeks before his primary, a group called Results for N.C. spent $1.7 million to defeat him and support his opponent. The National Association of Realtors, which gave $600,000 to CLF, gave $300,000 to the cause. A nonprofit that does not disclose its donors, Americans for a Balanced Budget, gave $830,000.

Most of the rest of the money, $700,000, came from Ryan Salame, an executive at crypto currency exchange FTX U.S., a major donor both to McCarthy’s own operation and to other groups backing McCarthy’s favored candidates. […]

12 thoughts on “Inside Kevin McCarthy’s war on MAGA, America First”