He’s lil’ Tricia’s faaaaaaaaaavorite Republican.  He’s the Republican most likely to take a walk when a vote on something actually in line with the GOP platform comes up.  He’s also got a Democrat lobbyist / campaign consultant working out of the offices of his trucking company.  Now, Charles Jeter appears to be the NUMBER ONE target of the anti-tholl road crowd that had great success in last week’s elections: 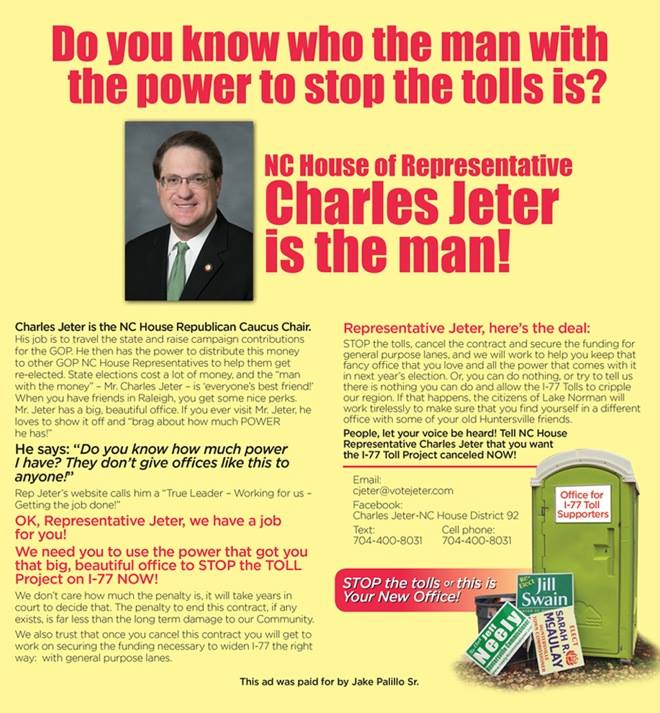 People rolled their eyes and snickered about this anti-tholl bunch at one time.  After last week’s voting, things have gotten a lot more quiet and respectful.  Jeter is apparently recognizing that the landscape has changed dramatically:

Lake Norman business leaders say it’s not too late to change the state’s plans for Interstate 77 toll lanes from Charlotte to Mooresville. And they’re working to do just that.

Bill Russell, president and CEO of the Lake Norman Chamber of Commerce, said he and other business leaders have met with state legislators on other ways to expand the bottle-necked highway.

And state Rep. Charles Jeter, R-Huntersville, told me on Friday that he and state Sen. Jeff Tarte, R-Cornelius, intend to announce a “plan of attack” on Monday. He said he needed to finalize details with Tarte over the weekend and could be no more specific. Tarte couldn’t be reached.

“I think we have to make sure we listen to the voters and not the bureaucrats in Raleigh,” Jeter said. […]

3 thoughts on “I-77 tholl foes turn their focus onto State Rep. Charles Jeter”