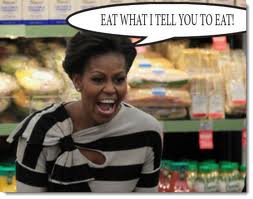 Rush Limbaugh, Stephen Colbert,  and the network news programs have all had a field day with Carolina Journal’s Nugget-gate exposé at West Hoke Elementary School:

A preschooler at West Hoke Elementary School ate three chicken nuggets for lunch Jan. 30 because a state employee told her the lunch her mother packed was not nutritious.

The girl’s turkey and cheese sandwich, banana, potato chips, and apple juice did not meet U.S. Department of Agriculture guidelines, according to the interpretation of the agent who was inspecting all lunch boxes in her More at Four classroom that day.

Wait? More At Four?  Isn’t that the program that Boss Bev is demanding the legislature spend more money on?  Why? Is the NCAE demanding pay raises for the lunchbox inspectors?  Wait.  This story gets better — um, er, I mean — WORSE:

The Division of Child Development and Early Education at the Department of Health and Human Services requires all lunches served in pre-kindergarten programs — including in-home day care centers — to meet USDA guidelines. That means lunches must consist of one serving of meat, one serving of milk, one serving of grain, and two servings of fruit or vegetables, even if the lunches are brought from home.

When home-packed lunches do not include all of the required items, child care providers must supplement them with the missing ones.

The girl’s mother — who said she wishes to remain anonymous to protect her daughter from retaliation — said she received a note from the school stating that students who did not bring a “healthy lunch” would be offered the missing portions, which could result in a fee from the cafeteria, in her case $1.25.

“I don’t feel that I should pay for a cafeteria lunch when I provide lunch for her from home,” the mother wrote in a complaint to her state representative, Republican G.L. Pridgen of Robeson County.

The girl’s grandmother, who sometimes helps pack her lunch, told Carolina Journal that she is a petite, picky 4-year-old who eats white whole wheat bread and is not big on vegetables.

“What got me so mad is, number one, don’t tell my kid I’m not packing her lunch box properly,” the girl’s mother toldCJ. “I pack her lunchbox according to what she eats. It always consists of a fruit. It never consists of a vegetable. She eats vegetables at home because I have to watch her because she doesn’t really care for vegetables.”

When the girl came home with her lunch untouched, her mother wanted to know what she ate instead. Three chicken nuggets, the girl answered. Everything else on her cafeteria tray went to waste.

“She came home with her whole sandwich I had packed, because she chose to eat the nuggets on the lunch tray, because they put it in front of her,” her mother said. “You’re telling a 4-year-old. ‘oh. you’re lunch isn’t right,’ and she’s thinking there’s something wrong with her food.”

While the mother and grandmother thought the potato chips and lack of vegetable were what disqualified the lunch, a spokeswoman for the Division of Child Development said that should not have been a problem.

“With a turkey sandwich, that covers your protein, your grain, and if it had cheese on it, that’s the dairy,” said Jani Kozlowski, the fiscal and statutory policy manager for the division. “It sounds like the lunch itself would’ve met all of the standard.” The lunch has to include a fruit or vegetable, but not both, she said.

There are no clear restrictions about what additional items — like potato chips — can be included in preschoolers’ lunch boxes.

“If a parent sends their child with a Coke and a Twinkie, the child care provider is going to need to provide a balanced lunch for the child,” Kozlowski said.

Ultimately, the child care provider can’t take the Coke and Twinkie away from the child, but Kozlowski said she “would think the Pre-K provider would talk with the parent about that not being a healthy choice for their child.”

It is unclear whether the school was allowed to charge for the cafeteria lunches they gave to every preschooler in the class that day.

“Sites must provide breakfast and/or snacks and lunch meeting USDA requirements during the regular school day. The partial/full cost of meals may be charged when families do not qualify for free/reduced price meals.

“When children bring their own food for meals and snacks to the center, if the food does not meet the specified nutritional requirements, the center must provide additional food necessary to meet those requirements.”

Still, Kozlowski said, the parents shouldn’t have been charged.

“The school may have interpreted [the rule] to mean they felt like the lunch wasn’t meeting the nutritional requirements and so they wanted the child to have the school lunch and then charged the parent,” she said. “It sounds like maybe a technical assistance need for that school.”

Pridgen’s office is looking into the issue.

So, THIS is what Judge Howard Manning and Mike Easley and Bev Perdue say we must fully-fund with tax dollars — regardless of a family’s ability to pay?   Academic performance at THIS SAME SCHOOL is SO BAD that the county school system is having to pay people from outside the faculty to come in and perform after-school tutoring.   It sounds like West Hoke Elementary School has bigger problems than the contents of student lunchboxes.

Kudos to State Rep. Gaston Pridgen (R-Lumberton) for digging into this.  Pridgen made history in 2010 by becoming the first Republican elected to represent the traditional Democrat strongholds of Robeson, Hoke, and Scotland counties.  His fellow Republicans threw him under the bus during redistricting by placing him in an even more Democrat-leaning district.  Hopefully, his constituents recognize that they have a legislator fighting FOR them against bureaucratic nuttiness.