Remember the good ol’ days when leftists were preaching to us about the importance of listening to those we disagree with and respecting all opinions?

I’m sure New Hanover County school board member Tammy Covil is wondering what happened.  The conservative made the ”mistake” of posting her opinion on a closed Facebook group page. A screenshot was taken and sent to the Democrats, and the ”pinkshirts” took to the streets calling for Ms. Covil’s head.

What did she say that got the gaystapo all bent out of shape? 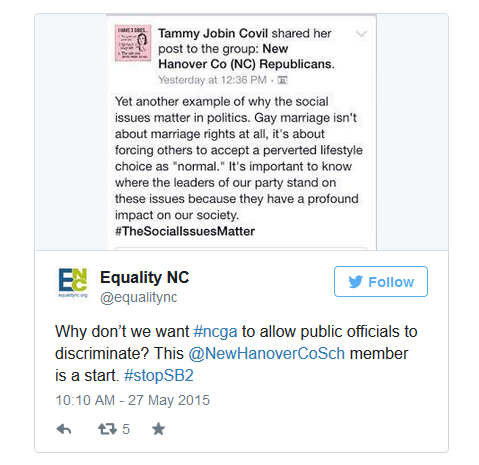 O-Kay.  A definition I found for “perverted” was:  “deviating from what is known as right or correct.”  Arguably, in many, many communities, that would appropriately represent the majority view.

The left sees Covil as a big problem.  She is serving on the state’s Common Core study commission. My New Hanover sources tell me she is a possibility for superintendent of the school district there.

Covil has spoken out against the teaching of nonsense like “gender fluidity.”  (I’ve heard about that in some amphibians and reptiles, but not in humans.)

The lynch mob has already set up a Facebook page aimed at shutting Covil down.

If you live in New Hanover County, do what you can to help this woman out.  If you don’t live there, talk to any of your friends who do.  Donate money to her campaign. Leaders like Tammy Covil — who dare to stand firm on their principles — are our only hope for saving our society, our culture, and our country.

14 thoughts on “Gaystapo on the march in Wilmington”