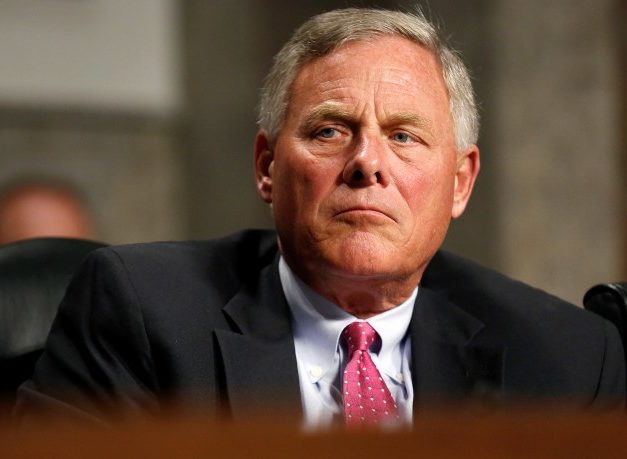 No, it’s not the title of Daniel Craig’s swan song as the fabled agent 007.   We’re talking about the latest buffoonery from our special-needs senior US senator who has allowed Democrats to hijack the committee he chairs:

In a bipartisan report, the U.S. Senate Intelligence Committee has reaffirmed its support for the intelligence community’s assessment that Russia interfered in the 2016 presidential election with the goal of helping Donald Trump get elected.

Among the key findings of the report released on April 21 is that the intelligence-community assessment, which came out in January 2017, “presents a coherent and well-constructed intelligence basis for the case that Russia engaged in an attempt to interfere” with the U.S. election.

It says that the assessment “reflects proper analytic tradecraft” and “represented the kind of unbiased and professional work we expect and require from the Intelligence Community.”

The intelligence community’s 2017 assessment found that Russia’s goals were to undermine public faith in the U.S. democratic process; denigrate the nominee of the Democratic Party, Secretary of State Hillary Clinton; and harm her electability and potential presidency.

The “intelligence community” they cite is mainly former FBI director James Comey and a bunch of other Obama appointees.

“One of the [intelligence community’s] most important conclusions was that Russia’s aggressive interference efforts should be considered ‘the new normal.’ That warning has been borne out by the events of the last three years, as Russia and its imitators increasingly use information warfare to sow societal chaos and discord,” Burr said in a press release.

“With the 2020 presidential election approaching, it’s more important than ever that we remain vigilant against the threat of interference from hostile foreign actors,” he added.

Senator Mark Warner (Virginia), the top Democrat on the committee, praised the intelligence agencies’ “unbiased and professional work,” and warned that there was “no reason to doubt that the Russians’ success in 2016 is leading them to try again in 2020.”

The committee said in its report it had found “specific intelligence” to support the conclusion that Russian President Vladimir Putin “approved and directed aspects” of the Kremlin’s interference efforts.

The report expressed “high confidence” in its judgment that Putin and the Russian government developed a clear preference for Trump.[…]

Seriously?  Despite the fact that Hillary and Bill Clinton got MILLIONS from Russian sources seeking their backing for a North American uranium deal?  They wanted Trump over Hillary?  (Are you kidding me?)

We’ve also had Trump warning Russia to GET OUT of Venezuela and trading threats with Russia over missile strikes in Syria.  And DJT was Russia’s favored candidate?

A section titled On Putin’s Role in the 158-page report is among dozens of pages blackened out entirely. Burr said the redactions were necessary because the committee sought to protect the methods and means by which the U.S. intelligence community secured its information.

The latest report is a bipartisan endorsement of a conclusion that had been called into question by Republicans on the House Intelligence Committee. They said in their own 2018 report that the intelligence agencies failed to employ proper “tradecraft” when officials concluded Russia supported Trump’s candidacy.

I guess “Tricky Dick” makes this farce “bipartisan.”  (Let stuff like this be a lesson to you folks who vote for “the R” because he’s “better than”  Kay Hagan or Deborah Ross.  As we’ve found out,  “the R” usually isn’t much better.)

[…] The conclusions released on April 21 are the fourth of five reports the Senate Intelligence Committee is releasing on Moscow’s interference in the 2016 campaign. The committee previously endorsed the intelligence-community assessment in its earlier reports, which are part of its more-than-three-year investigation into Russian interference.

The final report will focus on the counterintelligence aspects of the investigation, including allegations that Trump campaign officials coordinated with Russian operatives.[…]

That “final” report is supposed to hit the streets in September.   Of course, there is a BIG election coming up in November.

7 thoughts on “From Russia — um, RICHARD, with Love”