Haymaker fans from the Raleigh area may be familiar with blogger BobLee .  You may recall the trouble he and his partner-in-crime AgentPierce stirred up on the N&O’s comment section back-in-the-day.

BL is a friend of The Haymaker.  We link to his stuff on our blogroll.  We were surprised to hear this morning that the national controversy around Twitter suspending right-leaning accounts had touched down within the borders of our fine state.

Here’s what BL shared with me, and a few select others this morning: 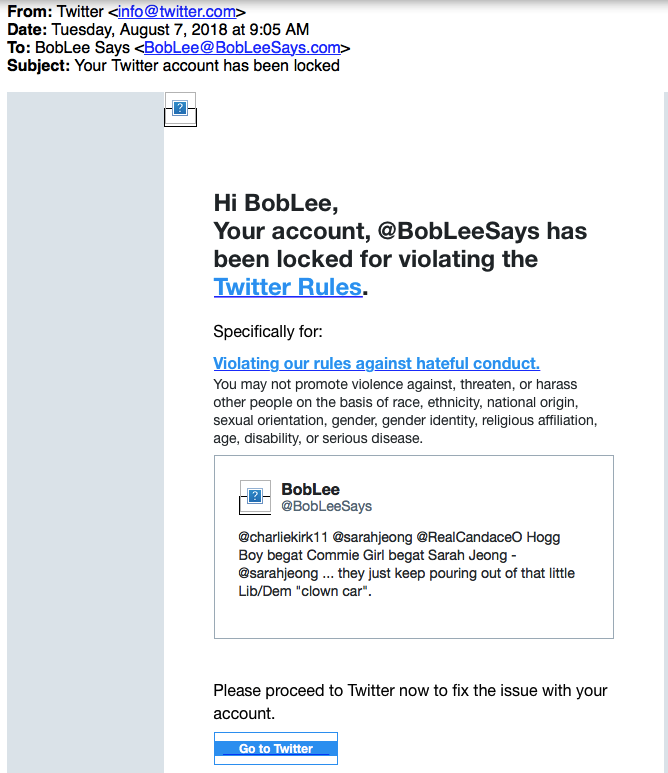 I am still scratching my head trying to figure out HOW that tweet “promotes violence”, “threatens” or harasses ANY of those protected classes of people.
You can still see the tweets in BobLee’s account.  But BL confirms that he cannot share anything or post anything new until at least this evening.

BobLee has some distinguished company.  The director of the Ron Paul Institute and the editor of Antiwar.com have also been hit with a similar penalty.

(Meanwhile, “Calvin pi**ing” is alive and well on  Twitter.   As is “Calypso Louie” Farrakhan and his rants about “The Satanic Jew.” And let’s not forget the lunacy of all kinds of local chapters of the violent, radical antifa movement.)

Is this a Bunker Hill moment for free speech in America?