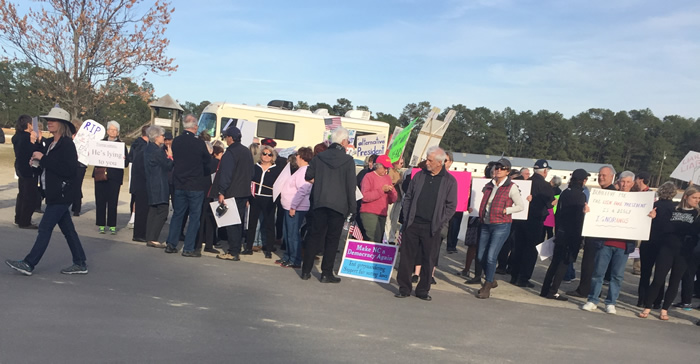 Yes, the traveling political circus made it to our sleepy little resort community this fair spring evening.  Fox News was hosting a town hall just a hop-skip-and-a-jump from Haymaker HQ, so I thought it would be worth scooting by and checking things out. 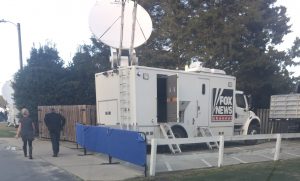 r Barn.  (*There must have been a real run on magic markers and posterboard earlier in the day.*)

The pro-Trump folks appeared to be outnumbered 3 or 4-to-1 by angry lefties bearing signs with such heart-felt, tear-jerking homilies as “I Stand with Planned Parenthood,” “Insane Clown President,”  and “The Earth Can’t Wait Four Years.’

For those of you who don’t know, Moore County — where Pinehurst is located — is about as yellow-dog Republican as you can get.  If you are a Republican running here against a Democrat, and can’t get 65% of the vote, something is wrong with you.  Our local Democrats meet in a phone booth.  Most of our political debate is resolved in the GOP primary.

So, it was definitely a surprise to see more lefties than Republicans out there.  But, then again, the protesters were gathered between 5PM 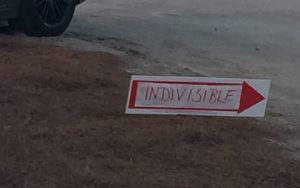 and 7 PM — known affectionately ’round these parts as ‘The Happy Hours.’  That is the time period most locals — especially the retirees — are getting their drink on.  Most cocktail parties happen at that time. (The folks still young enough to work are getting home and dealing with the kids.) It’s not a great time frame to expect a big turnout for anything — non drinking related — around here.

I studied some of the lefties and began to realize — ‘Hey, I don’t know these people.’  (As I said, the local angry leftist crowd is very small.  I’m active in local politics. So, I tend to at least recognize them on sight.)

Then, I noticed some homemade signs along the roadside which read ‘Indivisible.’ They all had arrows pointing the way to where the lefties were gathered with their poster board.  “Indivisible” is the national leftist group funded by George Soros for the purpose of disrupting and terrorizing town hall meetings sponsored by Republican politicians.

Locals would have known the way to The Fair Barn.  It is a local landmark.  They had to leave signs, as “bread crumbs” to guide this out-of-town rent-a-mob to the Fox broadcast site.  (I can’t wait for the breathless reporting from Miz Leslie, Binky and Little Colon Campbell: “Hey, look! They even hate Donald Trump in rock-ribbed Republican Moore County!’‘)