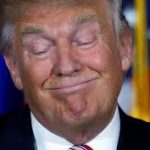 The drivebys want to tell you President Trump is despised, hated, loathed in all corners.  Yet, you’re getting big business types — well-known suckups to Dems — praising our CINC.   The State of the Union speech last night got a 75% approval rating in a CBS poll.

Even more curious is the number of skittish RINOs and NeverTrumpers who appear to be stampeding for a spot under the Trump tent.

Back in 2016, Robin Hayes gleefully joined the rest of the NCGOPe elite on Marco Rubio’s North Carolina campaign committee.  (State House speaker Tim Moore did not publicly endorse any presidential candidate.)  Prior to last night’s speech, NCGOPe-types were all over Twitter boasting about how Hayes and Moore would be in the room for the SOTU.

Art Pope and his tap-dancing sidekick have rarely had anything nice to say about our current president.  But then  THIS showed up:

[…] The Associated Press quoted Pope as saying he has become more supportive of Trump in general — “The policies of this administration have really benefited the American people,” he said — but is worried about what may happen during the fall elections. […]

(No word yet if the relatively young man,  with the receding hairline,  in the tap shoes has become “more supportive.”)

Pope was with Hayes on Team Rubio during the 2016 campaign.   (Interestingly, he is also a co-founder of The North Carolina Libertarian Party.)

Politics is FULL of people who hold their finger up to the wind — moving back and forth between bandwagons to ensure they are with the winning crowd.  Watching folks like this warm up to The Donald is a clear indication that he might not be as bad as MSNBC and CNN (and the tap-dancer) tell you.

3 thoughts on “EVERYBODY loves Donald”