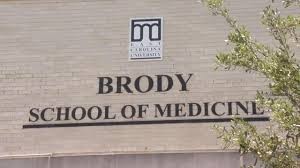 The drive-bys are telling us that the medical school at East Carolina is in deep trouble:

The chancellor of East Carolina University says the medical school in Greenville could close in five years unless its financial losses are reduced.

Chancellor Steve Ballard told WNCT-TV that the Brody School of Medicine is in serious financial trouble after millions of dollars in losses in recent years.

Ballard says the medical school lost $14 million last year, in large part because of state restrictions on how they can receive federal money and the inability to collect debts.

“We can’t stay accredited if we have three more years of $14 million lost. We’ll be closed,” Ballard said.

What federal money?  We’re approaching $20 TRILLION in debt as a nation.  Any ”federal money” is basically debt owed to foreign creditors that COULD be called in any day now. There is NO federal money to give. Only more IOUs that sink our nation deeper into a hole filled with red ink.  MORE:

To remain accredited, Brody must keep 90 days cash in reserve, which amounts to about $40 million. The school has only about $32 million on hand at the moment.

How has the budget grown at the school over that time?  Is the faculty loaded with a bunch of six-figure salaried types who teach one day a week? Has there been any attempt at belt-tightening or cost-cutting before turning to the media and the taxpayers to beg for MORE money?

Of course, politicians — led by Gov. Pat McCrory — are falling all over themselves to talk about how important it is for the state to “save” the ECU medical school.  Is it really? This sounds like a failure of the alumni association and the development office at the campus. It sounds like there are millions in tax dollars being dumped into an institution whose offerings are either (a) not so much in demand anymore, or (b) too expensive for students to afford.

Perhaps the school’s woes can be attributed to the rapid decline of morale among medical professionals these days.  I have a number of physician friends who tell me the “thrill is gone.”  They entered the field of medicine decades ago out of a desire to help people in need. But now, after decades of enduring the growth of red tape and eyeing the approach of ObamaCare, these folks are talking about how they can’t wait to retire. To GET OUT.  They all tell me that — if they had known then what they know now about the state of medicine — they would have chosen another field.

Thank demagogic politicians for creating this mess.  As late as the 60s and 70s, you had doctors making house calls. Now, you get packed into waiting rooms like cattle waiting for your five minutes with the doctor.  And you’ve got to deal with bureaucrats — who don’t know you or your situation — that are deciding whether you really need those pills or that procedure.  Idiot statist politicians are driving us right toward the same mess Canadians and the British have been enduring in their health care systems for decades.

If 2008 taught us anything, NOTHING is too big to fail.  Throwing cash at a sinking ship just prolongs the eventual crash.  if a private business was millions in d

ebt, there would be no governor talking about the importance of ”saving it.”  The business would be cutting its expenses and overhead, or shutting its doors and doing combat with lawyers and creditors. Statists think it’s fine to keep rewarding mismanagement with even more money from a seemingly bottomless pit of money.  (It’s nice when you own the printing press and have the confiscatory power of the bureaucracy.)  But if the current economic mess — brought to us by these same statist politicians — left all of these people unable to pay their debts to the college, ,how in the hell do they expect the rest of us to cover the tab for ECU?

To truly help ECU, the state needs to empower the school to fix its own mess.  Instead of dumping cash on the problem, cut some red tape to allow the school to cut its costs and get back on its feet. If government gets out of the way, and the school offers services at a reasonable price that people find desirable, the ECU med school should be able to right itself.

It would be a travesty to force the taxpayers to cough up even more of their hard-earned money to basically reward bureaucratic bloat and poor financial management in Greenville. ECU should be empowered to work internally to clean up its own mess.  Or we can all stand back and mourn the loss of something that could have continued to do a lot of good — had it not been for direct and indirect statist meddling.

4 thoughts on “ECU’s med school $$$ woes? (Sad, but problem is BIGGER than another govt bailout can fix.)”