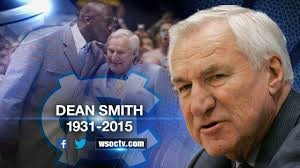 It hit like a ton of bricks when I got the news alert on my phone this morning regarding the passing of Coach Dean Smith.  I had been following his career — and cheering on his teams — since 1981.   (My family has had season tickets to Carolina basketball games since 1986.)  Smith stepped down in 1997, but it seems like the varsity basketball team in Chapel Hill never stopped being HIS.

Since 1997, the coach had been out of the public eye battling various illnesses.  You saw his name on the building that now serves as home for the basketball team.  You saw photos of him on display in the concourse of that building.  You occasionally saw him pop up on video presentations on the arena’s big screens.  But many many fans had hoped, since 1997, to see him return to the sideline where he had worked so much magic.

I checked out the coverage across cyberspace of Coach Smith’s passing.  Lefties, of course, were awfully smug about the coach’s left-wing activism on behalf of certain political candidates and hot-button issues.  While that aspect of his life was certainly disappointing, I have many other things to remember him for:

A unifier.  During his time at Chapel Hill, Coach Smith provided a sense of commonality and “family” for big-city lawyers in Raleigh, project kids in Charlotte, and farmers in southeastern North Carolina.  His leadership gave a diverse group of folks from Murphy to Manteo something to cheer for together — a sports team that won with class and represented the state well. 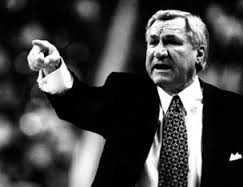 A class act.  It was HARD to get the guy to say something negative about an on-court opponent, an official, or even one of his players.  The guy didn’t throw chairs or curse at court side.  He discouraged students from waving their arms Cameron-Style in an attempt to distract opposing free throw shooters.  (It wasn’t a classy thing to do.)  His players were in suits and ties whenever they were in the public eye representing the university.

Selling the Carolina brand.  Coach Smith helped put UNC on the map well outside the state’s borders.  Carolina basketball paraphernalia — long after his retirement — still ranks up at the top in overall sales worldwide.  I can remember traveling in the far corners of Asia and Europe and seeing foreign kids and teens wearing the Carolina blue.   The basketball team’s excellence during the Smith era helped increase revenue and open up all kinds of new revenue channels for the university.

Teamwork, and not individualism.   With his teams, Coach Smith emphasized moving without the ball, setting picks, and looking for the pass before taking a shot.  Smith would bench some of his best talents if he thought they weren’t being enough of a team player.

The game’s chattering classes claimed Smith held back thoroughbreds like Michael Jordan and James Worthy with this approach.  On the contrary, he offered his guys an important life-lesson that could well-suit a lot of the tattooed, selfish ball-hogs who seem to dominate the game of basketball today.

A long-term investment.  Coaches are often stereotyped as using their players for four years, and then washing their hands.  His former players tell stories about Coach Smith keeping track of them, their careers, and their families well after they graduated and departed Chapel Hill. Former players could count on him — in a minute – for a job reference. 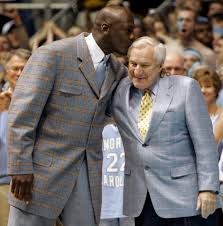 As a 6’3” 230 lbs. middle schooler, I had visions — like a lot of little boys across North Carolina — of developing my skills and eventually playing for Coach Smith.  I spent two summers at the coach’s basketball camp in Chapel Hill.  Both years, my group counselor was a lowly assistant coach by the name of Roy Williams.

During my second year at camp, I was lumped in a group with mostly high school seniors.  I regularly got matched up with 7-footers being looked at for college scholarships.  Let’s say that was quite a humbling experience.  I got dunked on more times than I care to remember.

I’ll never forget an incident during one of our afternoon practice sessions in the Tar Heels’s  then-home Carmichael Auditorium.  I was part of a five-on-five scrimmage.  Of course, my 7-foot opponent was having his way with me.  But on one play, I caught a great pass from one of the guards, faked the big guy out of his jock, and swished a sweet turnaround jump hook.   ”Nice shot, big man !!!” was the exclamation from the sidelines.

I turned to look in the direction the exclamation came from.  There, I saw Coach Dean Smith standing on the sideline clapping and pointing at ME.  I swear I was walking on air at that point. 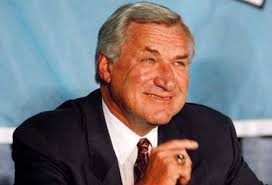 At the end of the scrimmage, Coach Smith came over to me as I was returning from the water fountain.  He took time to offer a quick critique on my shooting form. Coach Smith showed me a few times, and then let me try.  The whole exchange may have taken two minutes.  But for that almost-14 year old Tar Heel fan, it was a thrill of a lifetime.   I was — by far – one of the least talented players on the court.  But Coach Smith felt it was important to invest a little time and share his knowledge with this random kid.

Not long after that summer adventure, I started growing a lot more horizontally than vertically.  It soon became clear that my destiny was more toward the gridiron’s defensive line than basketball’s front court.

Dean Smith was the kind of guy who eschewed the limelight — not wanting to spoil the attention he thought the university and his players so richly deserved.  In an era of carnival sideshow barkers like Dick Vitale, Rick Barnes, and Rick Pitino, the college basketball world should do more to hold on to the legacies of giants like John Wooden and Dean Smith.

Coach Smith lived a full, proud, successful life  that positively touched a university, a state, a whole lot of players who passed through his practices, a whole lot of fans, and a whole lot of little boys who invested hours upon hours shooting baskets in their driveways dreaming of one day doing battle on the hardwood in Carolina blue.

Rest easy, Coach.  You earned it.

One thought on “Farewell to a giant”