That’s “Slick Willie” Clinton and “Round Willie” Barber.  Both of these snake-oil salesmen have been circulating this dubious claim about it being easier to buy a gun than it is to vote.   Lefties AND the driveby media have picked up that soundbite and run with it. 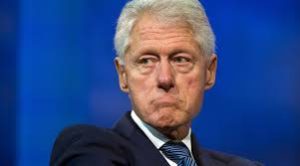 No “fact-checking” or tut-tutting that would be present for a comparable claim made by a Republican.

But let’s take a look at the whole premise.  First, here is the booklet from Roy Cooper’s Department of Justice laying out all of the rules and regs you need to meet before being able to buy a gun.   That’s FORTY-SEVEN PAGES.

Okay.  Now, let’s go over to the North Carolina State Board of Elections to find out the process for registering to vote.

THREE PARAGRAPHS to explain the process for registering to vote.  That’s compared to 47 pages of legalese governing a gun purchase.

Here’s National Review tackling this yarn when Bill Clinton first spun it in 2013:

[…] “A great democracy,” the former president claimed, “does not make it harder to vote than to buy an assault weapon.” This is vintage stuff from Slick Willy: It contains just about enough truth to seem credible while leaving a distinct and outsized — and thoroughly misleading — impression upon the listeners, most of whom will never bother to check the facts. In Salon today, Alex Seitz-Wald seizes on Clinton’s phrase with unalloyed joy. Clinton, he claims, not only delivered “one of the best lines of the day, but one of the best lines of the debate over voting rights.” I suppose if one is interested only in the political efficacy of what were extremely carefully chosen words, then this is a fair reaction. But, contra Seitz-Wald’s conclusion, what Clinton said is not “absolutely true.” In fact, one needs to add an awful lot of caveats to get even to the dizzy heights of “partially true.”

Seitz-Wald’s defense rests heavily on a familiar line of argument. “Under federal law,” he writes, you can buy a gun through a private seller without even showing an ID. And assault weapons have been fair game since the ban on them expired in 2004.

Seitz-Wald then contrasts this with the peculiar claim that there are “zero states where you can vote without providing some kind of ID,” which he says is the result of “federal law.” Those familiar with the law in both of these areas will presumably recognize how delicate the Clinton–Seitz-Wald proposition is. For a start, there really is no such thing as an “assault weapon.” As Reason’s Jacob Sullum has observed, “The distinguishing characteristics of ‘assault weapons’ are mainly cosmetic and have little or no functional significance in the context of mass shootings or ordinary gun crimes.”

They are not required for non-commercial trades, which are mostly conducted between acquaintances, which cannot be conducted by anyone who makes a living making or selling guns, and which thus represent a tiny fraction of all firearms purchases (so-called assault weapons represent a fraction of those sales, too). Furthermore, that federal law does not require private sellers to conduct background checks is not the whole story. 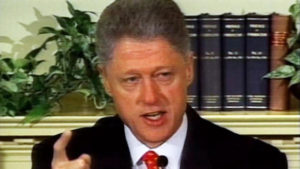 The states of California, Oregon, Colorado, Illinois, New York, Massachusetts, Connecticut, Rhode Island, and New Jersey most certainly do. It is true that if you’re really desperate to get hold of a firearm without an ID, in much of the country you can. But private sales are not the normal way one buys a gun, and, unlike voting, private sales do not represent public transactions.

(Should the federal government require identification to be presented at private elections?) Clearly, Bill Clinton sought to leave the opposite impression. What Clinton and Seitz-Wald are ultimately arguing is this: “Providing that you live in one of the states that have not banned ‘assault weapons’ and in which private sales are not covered by background checks and you choose not to purchase through a gun store or a licensed dealer, then, in what is currently seven, but may soon be thirteen, states, you may have to jump through fewer hoops to get hold of your firearm than you would to vote.”

This is not quite as catchy as the original, I grant you. For his part, Seitz-Wald puts it like this: There are 33 states where you can buy an assault weapon without ID, versus zero states where you can vote without providing some kind of ID — it’s federal law. Meanwhile, there are 43 state [sic] where you can buy an assault weapon with an ID, and, and 37 states were [sic] you can vote without a government-issued ID. If you’re wondering about that “zero states” claim, note that Seitz-Wald is willfully conflating registering to vote with actually voting.

Certainly, federal law holds that Americans need “some sort of ID” to register. But it does not hold that they need an ID actually to vote. It is the latter, not the former, that has led to the problem of people voting on behalf of others, and it is the latter problem that voter-ID laws are designed to fix. Moreover, because states do not have equal populations, his tally doesn’t quite show what he thinks it does. The total population of the states that do not require background checks for

private purchases of “assault weapons” is 210 million; the total population of states that do not currently feature strict voter-ID laws is 260 million. Seitz-Wald also argues that: While it takes just a few seconds to complete a background check in more than 95 percent of cases, it can take hours of work and days of waiting for someone to acquire the ID they might need to vote. It does indeed take only a few seconds to complete a background check. However, Seitz-Wald neglects to mention two crucial things. First, in order to go through the mandatory federal background check that accompanies all commercial firearms purchases, buyers are required by federal law to provide a government-issued photo-ID.

Thus, to the background-check process, you can add, in Seitz-Wald’s own words, the “hours of work and days of waiting for someone to acquire [an] ID.”   It is this system that the Democratic party was desperate to expand to all sales. Had Toomey-Manchin passed, every single firearms transaction in the country would have been subjected to a background check that required a government-issued ID. The Left thus simultaneously holds the positions that it is so horrible for the government to require citizens to show ID before they vote that all such requirements must be abolished, and that it is so necessary to require citizens to show ID before they can buy firearms — even from a friend — that the requirement must be nationalized.

Second, many states require citizens to get hold of a permit to purchase a firearm in the first place — long before they ever get to the background-check stage. Indeed, depending on their local laws, many citizens have to go through some combination of a firearms class, police fingerprinting, the submission of forms, and a criminal background check before they are allowed to try to buy a gun — privately or commercially. And, of course, as part of this permitting process, the majority of the states that issue permits require applicants to show — yes, you’ve guessed it — a valid ID. I suspect that those comparing voter-ID laws and the purchase of firearms are leading themselves down a road they will one day wish that they had not. Bill Clinton was arguing against requiring voter ID on the grounds that obstacles to the exercise of basic rights are unbecoming of a “great democracy.”

4 thoughts on “Easier to get a gun than vote? : The Gospel of The Willies”