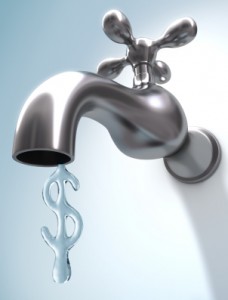 John Frank and The N&O have decided to finally start sniffing around about Janet Cowell’s Facebook gambit with state employee retirement funds:

State Treasurer Janet Cowell is coming under fire from state employees and retirees who are raising questions about the pension fund’s management after it invested in Facebook – which saw its value tank after its stock market debut.

The state reported losing $4.1 million on its $26 million investment in the social networking company’s initial public offering in May, but the actual damage could be much larger. The state’s 618,137 remaining Facebook shares are now worth half the $38 it paid for each.

In our previous reporting, my stockbroker source speculated that Erskine Bowles’s firm — underwriting Facebook’s IPO — pocketed  anywhere from 25 cents to 75 cents per share on the investment Cowell made.  So — we know that Cowell bought at least 618,137 shares of Facebook.  Let’s say Bowles’s concession per-share was 25 cents.   That means state employees’ $4.1 million loss meant at least $154,534.25 in Erskine Bowles’s pocket.   We need to know more. We need to know:

“Given the fact that IPOs are always considered to be somewhat speculative … people are outraged that some of their retirement money was lost,” said Ed Regan, executive director N.C. Retired Governmental Employees’ Association, who expects an inquiry into the matter. “On this one they messed up, and people want to know if anyone is going to be penalized for this.”

The taxpayers will surely be asked to cover this loss down the road.  That’s one group sure to be penalized.  Read On:

Cowell, a Democrat, did not respond to questions about the Facebook deal, but a spokeswoman downplayed the loss and defended the firm.

“This was an ordinary investment by the outside investment manager, made within the manager’s ordinary discretion … under its contract with the department,” Julia Vail wrote in a statement. “The Facebook IPO investment was less than a tenth of 1 percent of the pension fund’s global (stock) portfolio.”

About 43 percent of the $74.5 billion state pension fund is invested in global stock markets. The returns on the fund pay for benefits for about 850,000 state employees and retirees.

A broker at the Virginia-based investment firm Sands Capital Management bought the Facebook stock for the state, the treasurer’s office acknowledged Friday after declining to name the buyer a day earlier. The investment firm is one of Facebook’s largest institutional investors, owning 11.65 million shares of the company as of June 30.

The treasurer’s office provided a document showing the Sands Large Cap Growth fund produced returns of 3 percent for the year ending Dec. 31, and 31 percent over the three years prior.

According to Sands’ website, the fund selects 25 to 30 high-growth businesses to invest in based on a number of criteria. Among the fund’s largest holdings are blue-chip stocks such as Amazon, Apple, Google and Visa.

The average holding period for the growth fund’s investments is five years, according to Sands.

“Sands Capital is a solidly performing manager, and we expect that it will continue to be among the department’s outside managers,” Vail wrote in the statement.

The state declined to reveal how much money Sands Capital manages for the state and how much it is paid.

“How many times are we going to have to hear about so many people making money off (the pension) when we are losing money?” asked Ardis Watkins at the State Employees Association of North Carolina, which is advocating for a board to make investment decisions. “There are just so many questions raised by the events of this Facebook transaction.”

One major element that remains unresolved is whether Cowell or other top treasury officials consented to the Facebook purchase or played a role in the decision. The treasurer’s office would only say that the department receives information about transactions “within one business day.”

What’s unresolved?  State law makes it clear that Cowell has the final say on all investment decisions.  Read on:

The state retirement system revealed its loss last week when it joined a class action lawsuit against Facebook and its underwriters, alleging it was misled and seeking damages.

And now the law firm chosen to represent the state is also generating questions. Bernstein Litowitz Berger and Grossmann gave Cowell’s campaign more than $75,000 since her 2008 election to the post, according to state records.

Royal demanded more information about the transaction, saying a dotcom IPO “is just not an appropriate investment for a pension fund.”

“Do we not have any limits?” he asked. “Are (the state’s brokers) free just to do anything?”

The questions compound other conflict-of-interest concerns raised in legal documents by a competing law firm about Cowell’s close connection to prominent N.C. Democrat Erskine Bowles, a board member at Facebook and Morgan Stanley, which is a named defendant in the state’s case.

Bowles’ wife hosted a major fundraiser for Cowell’s campaign, but he did not contribute. Cowell filed a legal document this week saying the state “is intent on zealously prosecuting this action against all viable defendants.”

Altogether, the situation troubles SEANC’s Watkins. “Something doesn’t smell right,” she said. “At minimum, it’s an appearance of impropriety.”