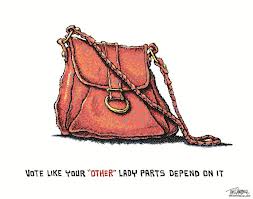 While North Carolina’s economy continues to rot. and the unemployment lines get bigger, the Democrat Party only wants to talk about gynecology.  First, the Obama campaign put up a post on its web site warning women to “vote like your lady parts depend on it — cause they kinda do.

In Wilmington, Democrat senate candidate– and alleged  Occupy Wall Street mouthpiece — Deb  Butler  is on TV waving around a TRANSVAGINAL WAND in her kitchen.  (YUMMY! What time is dinner?)

Now, Democrat lieutenant governor candidate Linda Coleman — an SEIU stooge — is attacking her GOP opponent Dan Forest via a TV ad for opposing taxpayer subsidies to Planned Parenthood — an organization formed with the specific purpose of culling the population of black and mentally-handicapped Americans.  Apparently ( according to Coleman’s handlers), Forest’s opposition to government funding of Planned Parenthood makes him against “access to affordable health care for women.”   I am sure Forest — the son of a breast cancer survivor — would object to that characterization.

(I am sure the government subsidy to Planned Parenthood is the foremost thing on the minds of our state’s women — many of whom are on unemployment or who have a loved one currently unemployed. )

The Forest campaign has sought a cease and desist order against SEIU over this latest ad.   John Frank — one of the more loyal leftist lapdogs in The N&O’s newsroom — has rushed to SEIU’s defense.  His latest piece has the headline: “SEANC fixes ad, but Dan Forest still cries foul.”

Really, John?  You ran a whiny piece the other day, fed to you by Dem opposition research, nitpicking about a spelling error in a Dan Forest mailer:

If elected, Republican lieutenant governor candidate Dan Forest says he wants to emphasize education. He might want to start with spelling.

His latest campaign flier misspelled “responsibility.” The N.C. Republican Party paid for the mailer — which Forest authorized. Dome’s not immune to typos so it’s a good thing we’re not running to control the state’s No. 2 elected post like Forest.

To lapdog John, a spelling error in a pro-Forest mailer produced by NCGOP trumps the fact that Forest caught SEIU and their puppet Linda Coleman violating the law. YAWN.  MOVE ON …
This kind of silliness “under the dome” exemplifies why print media is dying.  N&O newsroom residents do the left’s bidding, then move on to run the press offices of liberal politicians.  The newsroom denizens then take dictation from their relocated comrades in those press offices and feed us the pabulum.
2012 is bringing on a new day in Raleigh.  When the dust clears in November, the GOP is going to own that town.  With the explosion of new media, the N&O is no longer as necessary and important as it once was. (Those layoffs have really emptied out the newsroom, haven’t they? Heh. Heh.)
Keep it up John.  You guys are continuing your reckless drive down the highway toward irrelevance.