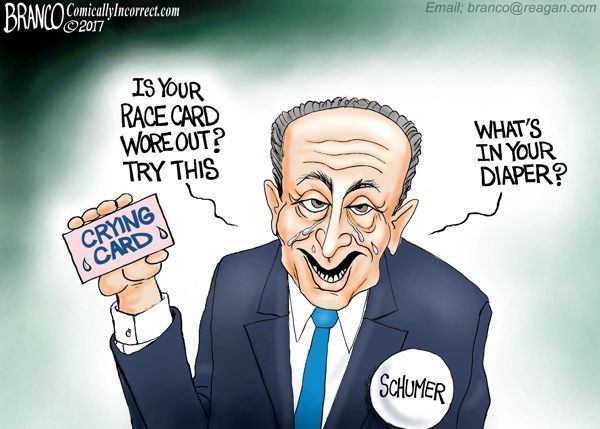 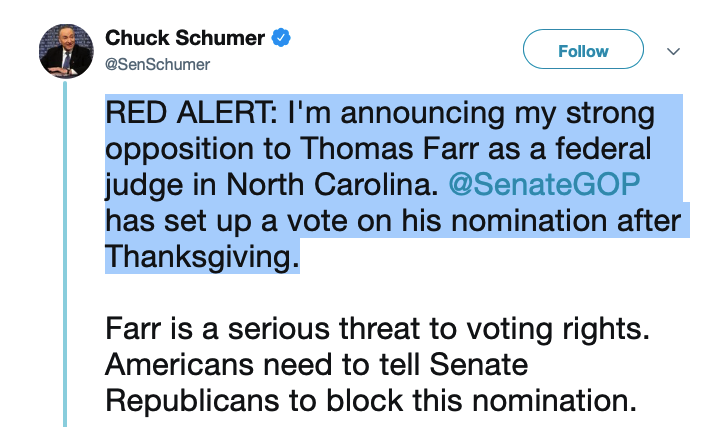 They made now-Justice Brett Kavanaugh a skeevy perv.  While the Republican majority has left North Carolina’s Tom Farr, an approved nominee for the federal bench, hanging out there to dry — Democrats have been trying to paint him as the second coming of Lester Maddox.

Farr’s “offenses”?  Working as counsel to the 1990 Jesse Helms reelection campaign and defending election reforms — like voter ID — proposed by the GOP majority in the state legislature.

I can’t vouch for Farr’s level of conservatism.  I know he has been a good foot-soldier for the state GOP.  I also know that he’s not keen on the idea of creative interpretation of the state or federal constitution.  (And earning the wrath and hatred of filth like The Round Rev and Chuck Schumer makes him okey-dokey in my book.)

We conservatives were repeatedly asked to hold our noses and suck up our pride to cast votes for Thom Tillis and Richard Burr.  We need them in place to approve right-minded judges, we were told.

We’ve got one of those right-minded judges right here and right now in Mr. Farr.  Yet, our two  Republicans in the US Senate have been noticeably quiet during the leftist slander barrage against Farr.

This is one of those opportunities for Thom and Dick to earn their keep.  Take leadership in pushing  through a quality nominee to the federal bench. And join the fight  to tell vermin like Schumer and

Barber that lies and the politics of personal destruction against Republican nominees are no longer going to be tolerated or accepted.

2 thoughts on “DC libs prepare to ‘Kavanaugh’ Tom Farr. Burr & Tillis need to step up to the plate.”