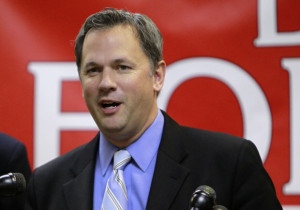 An ancient Chinese philosopher once said:  “If you can’t dazzle ’em with brilliance, baffle ’em with bullshit.”

Every day, WRAL, McClatchy, ABC-11 and all of their comrades in the professional Left attempt to baffle us.  We’ve got Republican members of Congress — out of fear of bad publicity — turning backflips to avoid taking a tough stand on ObamaCare.  We’ve got campaign consultants at the state and national level telling Republicans they need to back off this values “nonsense” — and start acting like Democrats on abortion, gay rights, immigration, government spending. taxes and a lot of other stuff.

Lt. Governor Dan Forest has decided not to be baffled or participate in the baffling of others.  He’s recognized the threat that the common core curriculum poses to public education — and society in general.  Forest has posed some rather tough questions to DPI superintendent  June Atkinson — so useless that Bev Perdue tried to sit her in the corner — about plans for implementing Common Core in North Carolina’s schools.  (Somebody HAD to do it.  McClatchy can’t be bothered to take a break from its swooning and dictation to give us the cold hard facts.)

Dear Sweet June  and her team got a little snide with our state’s second-in-demand  — whining about how much paper Forest’s request was going to require.  Lt. Dan responded by personally supplying some paper to our state’s chief education official.

Well. ol’ June has handed in her assignment to the Lt. Governor, and Mr. Forest is not pleased:

[…] Earlier this month, he got answers. [Forest] described the DPI response Thursday in a news release and YouTube video: 12 boxes with 40,000 pieces of paper with references to 134 websites, 320 separate reports, 40 presentations, a blog post and a thumb drive. Apparently he didn’t want to read it all.

“If the Lieutenant Governor, who is a member of the State Board of Education, has questions dismissed in this manner, imagine what will happen this school year when an individual parent or teacher asks these same questions,” he said. “It is unclear to me, why a Department that is supposed to promote the Common Core Standards is hiding behind mountains of information and not offering clear, concise, common sense responses to very reasonable questions.” […]

It appears that ol’ June is a disciple of that great Chinese philosopher.  She can’t dazzle ANYBODY with brilliance.  (Ask Bev Perdue about that.)  So, a-baffling she will go.

Would you buy ANYTHING that came along with 40,000 pages of supplemental documentation?  You’d never read it.  And there are likely all kinds of nasty surprises stuck in there by a bunch of corporate lawyers.

How many pages is The Constitution of The United States?  SIX. That document was sufficient to help found our country and give us a guideline for governance.

ONE POLICY within our public school system requires explanatory documentation of 40,000 pages ????  This is dangerous stuff.  We are being sold an insidious bill of goods within those 40,000 pages.  Forest is right.  Government doesn’t know best.  It’s supposed to operate in response to our wishes.  How can we grant consent if we’re buried under a mountain of bovine bowel movements?

We need the straight scoop on Common Core.  Right now, Dan Forest appears to be the only one out there passionately fighting to make sure we get it.