Jesse Jackson, Al Sharpton, and William “The Round Rev” Barber have all made a name for themselves by getting in the media and claiming that (1) whitey is keeping the brothers and sisters down, and (2) they, themselves, ARE down with “the struggle.”

Those three dirtbags bent over backwards to whip people into a frenzy over police officer-involved shootings in Ferguson, Missouri and New York City.  Marches and riots ensued.  That earned the trio even more face time in front of the drive-by media.

Then, those two NYPD officers were assassinated by a leftist radical who just happened to be black.  Officers have also been shot at in Florida and California.  On Christm 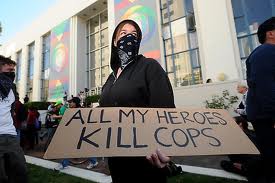 as night, a Durham police officer was ambushed, and nearly killed by two black suspects who are still at large. (The Round Rev is nowhere to be seen on this one.  Imagine if two white suspects had tried to kill a black police officer.)

The drive-bys are famous for not mentioning race when the suspect happens to be black.  It cracks me up to hear a drive-by encouraging readers / viewers to be on the lookout for a “man in his twenties wearing a white T-shirt and jeans.”  WTVD ABC11 DID manage to get out a passing mention of the suspects’ race.  I can’t find a mention of the officer’s race.  (Though, it really doesn’t — and shouldn’t — matter.) You can bet we’d see it if he happened to be black, though.

I found one particular web site that really hit it on the head regarding this Durham incident:

[…] The attempted assassination mimicked the tactics used to murder NYPD officers Rafael Ramos and Wenjian Liu on December 20. The Baltimore gang member who killed those walked up on the right rear of the officers’ marked police car and opened fire without warning. The gang member in that instance—who committed suicide minutes later in a subway as authorities closed in—cited the deaths of Michael Brown an Eric Garner as his excuse to “put pigs in a blanket.” The obvious copycat nature of the attack and it’s near success was simply ignored by WRAL and was only noted in passing by ABC 11. The Raleigh News & Observer—infamous for their support of eugenics and backing the Ku Klux Klan in the only successful coup against an elected government in American history—likewise failed to mention the obvious similarities to the assassination of the two NYPD officers. The national news media has not mentioned the attempted assassination at all, though it continues to fawn over the “social justice” revolutionaries using the mythologies of “Hands Up, Don’t Shoot” and “I Can’t Breathe” as they disrupt lawful commerce, attack police officers, riot, and loot private businesses. […]

Compare THIS to the coverage the drive-bys gave to a white Charlotte officer’s shooting of a black former football player.

And where IS the Round Rev?  He was all over the Ferguson incident — whipping people up into a frenzy against the police there as hard as he could.  He — and his allies — with all their anger-stoking antics have created this environment.  They own this.

The drive-bys love to insinuate that it’s the Tea Partiers who are the violent rabble-rousers.  The rioting we’ve seen nationwide — and these attacks on police — are all being perpetrated by Obama’s base.

One of the more outrageous things I’ve seen lately is that Duke University has scheduled William Barber to be the keynote speaker for its 2015 MLK Day celebration.  Really?  So, Fatso embodies the whole “content of their character, not the color of their skin” theme King promoted?  Can’t Duke find someone who has worked hard and made something of himself or herself thanks to said hard work?  Herman Cain?  Ben Carson? No, they’ve got to hold up a jheri-curled, bloated, demagogic malcontent nutcase race-pimp as a role model for young blacks across this country.  *Nice work.*

Leftists love to celebrate Joseph Welch for asking Senator McCarthy that famous question: “Have  you no decency, sir?”  It’s time for someone to stand up and ask that same question to our state’s drivebys, The Round Rev, Sharpton and Jackson. If they had any decency, they’d be out there condemning this violence against law enforcement officers and other innocent bystanders.

If we keep hanging our heads and kowtowing, these people and their lunatic followers will burn the country down around us.  It’s time to say enough is enough.

4 thoughts on “‘Chickens are coming home to roost’ — for the race pimps!”