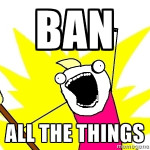 We’ve received an awful lot of comments — online and offline — regarding the comments by John Hood this weekend on NC Spin.  (Granted, a lot of people were interested in seeing Hood tell off senator Apodaca face-to-face.)

Most were more interested in his support for banning the Sons of Confederate Veterans license plate. John has recently been very interested in “sensitivity” — creating new transfer payments to make up for the state’s forced sterilization program for mental incompetents from 50 years ago.  He stood up for Gov. Pat’s feelings — laying in to Mr. Apodaca for being so mean to our chief executive. This weekend, he jumped right in with

The Round Rev and others on the left trying to blame the Confederate battle flag and a small group of history buffs for that shooting in Charleston.

Well, as we stated earlier, we think John should take this whole sensitivity thing ONE STEP FURTHER.   He should change his name.  First of all, his given name — John Hood — is WAY TOO SIMILAR to that of Confederate general John Bell Hood.  *As these establishment and leftist types will gladly tell you, memories of the Confederacy cause a lot of pain for a lot of people.* Perhaps our John should change his last name to something more culturally-sensitive, more appealing to the leftist masses like,oh, “Fitzsimon.”

All sensitive types out there should reach out to John’s book publishers, and the folks who run his newspaper columns, and let them know that they should not print or distribute any more of his stuff until he CHANGES THAT NAME.

Another one of our readers had a great suggestion for Jim Goodmon’s favorite conservative: 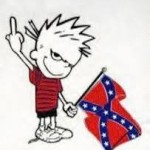 ”When I hear the word ‘hood,’  it makes me think of the Klan.  And thoughts like that make me uncomfortable and scared.  In this day and age, we should be following the lead of our Dear Leader in DC to work on making people feel less afraid and more comfortable.  Perhaps he could change his name to John H.,sort of like the Malcolm X. Now, THAT would be really culturally sensitive.”

What do you folks think?  If John thinks the SCV should change its logo for sensitivity purposes, shouldn’t he walk the walk along with talking the talk?  *Shouldn’t he take steps to be more sensitive and do away with the painful memories his name evokes in so many?*