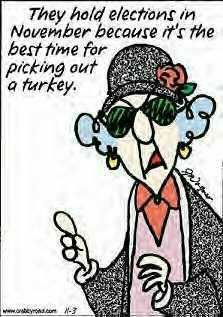 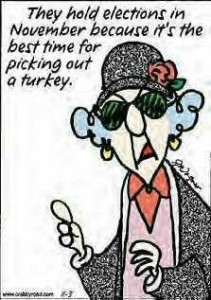 In Pinehurst, we’ve learned that Joan and Nancy think John Marcum is a liar — with pants afire — about deficit spending.  We’ve also seen emails that demonstrate that Joan and Nancy have, um, misstated the facts on Old Town’s historic landmark status and planned renovations.

Marcum says village manager Andy Wilkison makes more than Bev Perdue.  (Actually, according to our crack research team, Andy makes less than Boss Bev, but more than Lt. Gov. Walter Dalton and the rest of  the Council of State.  We’ll assume ol’ John got the offices of governor and lt. governor confused.)

Nancy has been running ads suggesting Marcum wants to fire all of the village staff.  (We haven’t actually seen or heard anything of the sort from the Marcum camp.)

In the meantime,  major decisions in village government are being made by a village manager and attorney while an oblivious, mostly geriatric council sits in the wings watching the soaps.  Planning and inspections takes pleasure in tormenting people with building projects, and the police department has a speed trap on every corner.

In Southern Pines, things are not much calmer.  The “law firm” of Smithson, Smith and Woodruff (AKA “The NIMBY ticket”) is ready to run all of the grocery stores out of town and implement strict new emissions standards for all residents’ appliances and vehicles.  They also want the town to pay for insulating EVERY residence in town, and claim this will SAVE the town money.  They want to model Southern Pines after a town in Iowa which is in a much worse economic state than Southern Pines has ever been in.

Mayoral candidate Chris Smithson pats himself on the back for his business acumen.  I don’t know what kind of business he runs — or thinks he runs.  But for a “busy chief executive” he sure does spend an inordinate amount of time on The Pilot’s web site message board.

On the other side, you have mayoral candidate David McNeill, and council candidates Jim Simeon and Fred Walden. This group has been part of a level-headed town leadership that has made some wise decisions for the town’s future and has repaired a lot of the damage (i.e., Leith) that has been done in the recent past.

On one side, you have an extreme anti-development, anti-progress green agenda, and on the other side you have common sense — like being fair to property owners — that has steered the town pretty well through some troubling times.

No matter how your allegiances fall, PLEASE get out and vote.  Put the personal stuff aside, and look hard at the issues.  Take what you’ve learned from us at The Haymaker — and from other responsible sources — and let that guide your choices.

I know that we don’t have a lot of great choices on our ballots.  But you have NO RIGHT to complain if you pass up an opportunity to vote.