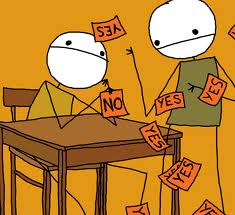 Yes, Moore County.  Our thrice-weekly Pulitzer Prize winning local newspaper is in the midst of preparing its endorsements for the municipal elections in November.  The paper’s editorial staff has been conducting private interviews with each candidate.

(It is interesting that the endorsements are already being prepped. The paper has provided very little coverage — beyond filing stories and one forum — on the various races to help educate their readers.)

I recently received some interesting insight into the paper’s endorsement process from an insider who is familiar with the details of said process.

Southern Pines Town Council candidate Jim Simeon will apparently NOT be getting the paper’s endorsement.  He was subjected to some highly aggressive questioning by Pilot publisher David Woronoff.  Simeon has been serving on the town’s planning board.  Woronoff suggested to Simeon that he should have killed the controversial Tyler’s Ridge development near Sandhills Community College because of an unpopular, unrelated action by the developer’s father.  (Neither the college nor the folks at the neighboring gardens publicly objected to Tyler’s Ridge.)

Surprised and perplexed by Woronoff’s line of questioning, Simeon countered with the fact that any activities by the developer’s father – who was not involved in Tyler’s Ridge — were not germane to the planning board’s deliberations.  Simeon added that he was not familiar with the father’s activity that Woronoff was referencing.  In response, Woronoff snapped: “It was on the front page of our paper!”

Here’s some advice for dealing with David Woronoff.  Three good ways to tick off the publisher (which I’ve learned from experience) are: (1) criticizing his paper,   (2) criticizing the Raleigh News & Observer, and (3) criticizing the newspaper business in general.

At that point, Woronoff  coolly informed Lincicome that he would not be receiving the paper’s endorsement.

Lincicome and Simeon should take heart.  The Pilot’s endorsement quite often is not necessary for an election victory.  The paper endorsed Richard Morgan over Joe Boylan in the 2006 state House race, which Boylan won.  In 2008, The Pilot endorsed Richard Morgan over Harris Blake in the state Senate race, and Nancy Fiorillo over Nick Picerno in the county commissioner race.  Blake is retiring this year undefeated, and Nick Picerno is now chairing the county board.

One interesting tidbit learned here is how much The Pilot senior staff’s personal feelings about a candidate factor into whether they get endorsed by the paper.