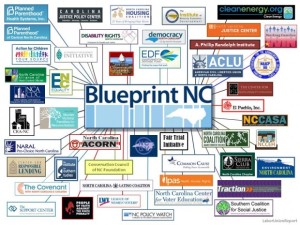 I am sure many of you have been keeping up with the whole BlueprintNC scandal —  a bunch of lefty non-profits scheming about “eviscerating” North Carolina Republican leaders.  It now appears that this nastiness has made its way to Southern Pines and Moore County.

The members of BluePrintNC include The North Carolina Justice Center, which gives us NCPolicyWatch, which begets Chris “The Mad Blinker” Fitzsimon.  You may know Fitzsimon from his rabidly lefty, and unchallenged, commentary on WRAL radio, and his weekly appearances on NCSpin — where he entertains viewers with his lefty nonsense AND a faster-than-the-speed-of-light eye blinking demonstration.

Benefactors to BluePrintNC include the Z. Smith Reynolds Foundation,  a lefty non-profit that has had formal relations with the current owners of The Southern Pines Pilot.  The current owners of The Pilot owned that big smelly pile of fishwrap, The Raleigh News & Observer, until the late 90s.   The Pilot now employs John Cole, long-time cartoonist for the lefty web site NCPolicyWatch, as its regular editorial page cartoonist.   In fact, Cole helped The Pilot re-design its masthead and layout.

Quite a tangled web of ghoulish lefty-ism, huh?  Anyway, we — in Moore County —  got “treated” to an unsigned editorial in Sunday’s edition of The Pilot that lashes out at NC Senator Jerry Tillman — the majority whip — in a very mean, very personal manner.  The op-ed was accompanied by a Cole cartoon, and featured language very similar to that frequently used by Fitzsimon henchman Rob Schofield in his attacks on Tillman:

Moore County residents have at least a couple of reasons to be surprised – they should be appalled – by the suddenly surfaced effort to revive the infamous payday loan industry in North Carolina.

For one thing, this misguided and unsavory campaign is being sponsored by one of our own. Actually, let’s rephrase that. Though state Sen. Jerry Tillman represents our county, among others, he is not really one of us, hailing instead from up Archdale way. This is all the more reason to elect somebody else next time around – someone who is from here and shows more evidence of sharing our values.

Wait a second guys.  You LOVED Tillman’s legislation reforming the state’s procedure for rewarding high school diplomas.  For some reason, you neglected to mention that the legislation was Tillman’s.  You even neglected to cover Gov. Pat’s trip to Randolph County to sign the Tillman bill — the first to be gubernatorially-endorsed in the McCrory era.  In fact, you were about the only regional media outlet that didn’t bother to cover the event.   Can’t let the facts get in the way of your partisan smear agenda.

By the way, attacking people for NOT being from Moore County is pretty weak.  You’re offending a huge chunk of your target market.  In fact, I don’t believe ANY of The Pilot’s owners are Moore County natives.  Does that make them “ill-equipped” to serve as our lone source of local news?

Payday loan schemes seek to prey on the most vulnerable in our midst by ensnaring them in loan upon revolving loan until they’re hopelessly mired in debt. In the past, investigations showed that some North Carolinians ended up paying as much as $8,000 in fees on a loan that originally totaled $200.

Tillman claims that the new payday loan industry, if there is to be one, will be kinder and gentler and less voracious in the usury it inflicts on its victims. We’ll believe that when we see it. The step he proposes seems certain to create far more problems than it solves.

The bill DOES NOT force people to get loans from these particular lenders.  Their interest rates are lower than those charged by many credit card companies.  The Tillman legislation actually provides a venue for people with less than stellar credit to obtain needed financing.  That little ol’ insignificant thing called capitalism dictates that the greater the risk that is present, the more precautions the parties involved need to take.   The customers in the payday lending arena are highly likely to default on repayment.  The lenders are right to protect themselves and cover their costs.  As long as the state ensures that no fraud or deception is involved, what’s the problem?

The baseball-capped Tillman has struck us from the beginning as singularly ill-equipped for the state Senate position he now holds, and this does little to assuage such doubts.

Wow.  So, wearing a baseball cap suggests that you are less than competent or are “ill-equipped”? I suggest that the author of this unsigned op-ed step outside the gated community where he lives, take a trip to Robbins or Vass, or Carthage, and make that argument.  (Don’t worry.  We’ve got some first-rate medical care here in Moore County.)

I’ve seen plenty of news media footage and photos showing Tillman not wearing a hat.  Yet,  The Pilot can only seem to find one blurry photo featuring Tillman — fresh off a medical procedure – wearing a baseball style cap.

For some reason, The Pilot refuses to mention that Tillman is the majority whip in the state Senate — the #2 spot in that chamber.  We’ve inherited a hell of a lot of influence in Raleigh.  During the final years of the Richard Morgan era,  The Pilot’s op-ed page fell all over itself to tell us we needed to keep Morgan in office because of his seniority in the House.  (Never mind that he was holding the meaningless, powerless positions of co-speaker and speaker pro tem — conveyed upon him as a result of his deal with the devil, Jim Black.)

I suppose I should not be surprised that stuff like this comes from a paper owned by hardcore Democrat partisans.  The family that owns The Pilot has been fiercely loyal to the North Carolina Democrat Party for generations — even during the period when it was little more than a thinly-veiled front for The Ku Klux Klan.  (Read more about that in Rob Christensen’s must-read book on North Carolina politics.)

Party loyalty is one thing.  Teaming up with shadowy leftist non-profits, hiding inconvenient facts and outright lying to push a partisan agenda is nothing short of despicable.

6 thoughts on “BluePrintNC, The Mad Blinker & The Pilot team up to smear Senator Tillman”