The team over at Carolina Plott Hound appears to have nailed The Greensboro News & Record for trying to mislead readers about the size of one of the lefty protests at the legislative building.

A handful of lefties showed up on Wednesday for something called ‘Witness Wednesdays.’  The N&R ran a photo with that story making the Wednesday event look HUGE.

The CPH called B.S. on the N&R — alleging that the Greensboro paper ran a photo from a larger Moral Monday protest to make the Wednesday event look bigger than it really was: 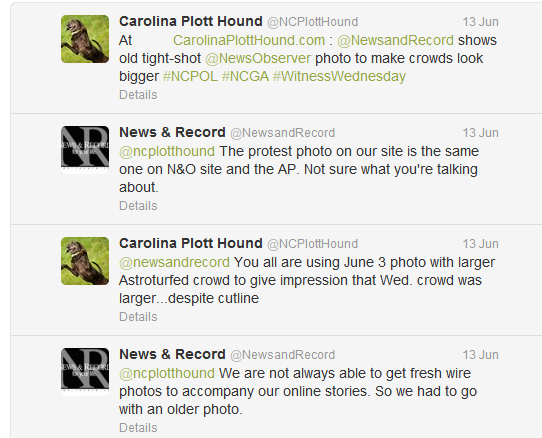 How honest is it to run a photo of action that took place on a different day from the action described in the story?  This is a major newspaper based about an hour or so from Raleigh.  (I think they have a capitol beat reporter.)

ONLY eight people got arrested on Wednesday.  That’s a far cry from the 100 or so from one of the Mondays.  ONLY eight arrests kills the narrative — the spin — the media is peddling.

I am still waiting on the N&R and the rest of the legacy media to report on Dana Cope’s tweets about “Moral Monday.”