The GOP challenger to Thom Tillis has a fundraiser coming up in Raleigh on June 5.   Tickets run from $125 to $5600.   Take a look at some of the names hosting the gig.  A lot of these people you might have expected to host a shindig for Thom: 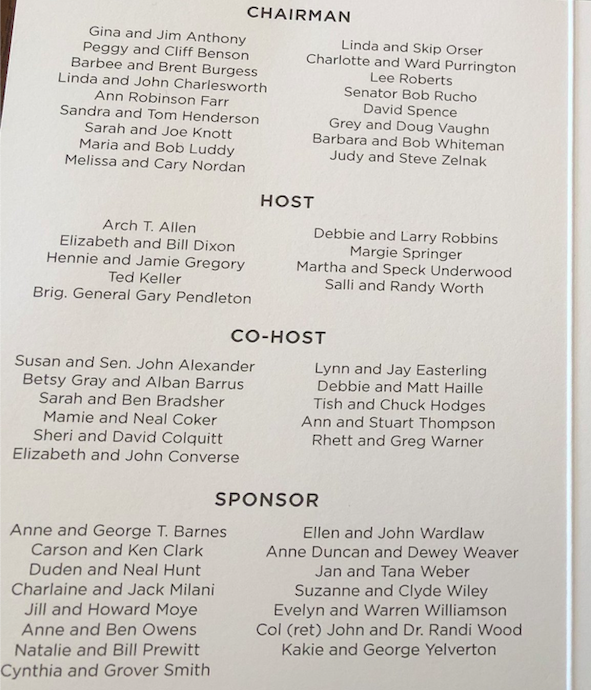 That’s an awful lot of political / social pull on that list.  Let’s highlight a few names, shall we?

Let’s start with the chairmen.  Lee Roberts  followed Art Pope as Pat McCrory’s budget director.   Bob Luddy is a successful, politically-active businessman with TONS of  money to bestow upon folks.  Steve Zelnak was the long-time CEO of Martin-Marietta Materials.  Cliff Benson is the former owner of Carolina Builders, a major donor to Wake Forest University, and a frequent host for presidential fundraisers held in North Carolina.

Ann Farr is related to THE Tom Farr whose federal judgeship nomination crashed and burned in the US Senate.   Joe Knott is Justice Paul Newby’s brother-in-law, a former candidate for attorney general, and a successful Raleigh attorney.   And then there’s BOB RUCHO.  (I can remember then-senator Bob Rucho following Tillis around all buddied-up while both were serving on Jones Street. )

And now, sponsors.  Neal Hunt is a former state senator who represented Wake County and was a pretty good conservative.