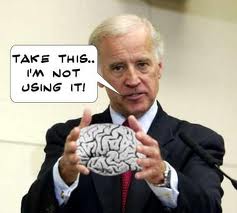 Late night comedians and the alleged mainstream media have tried to tell us that Republicans Sarah Palin, Dan Quayle, and George Bush are the biggest idiots to ever set foot in the American political arena.  Yet, their silence is deafening when it comes to some of the sheer idiocy  of Vice President Joe Biden.  From his “clean and articulate black” comment about BarryO to his urging, during a campaign rally speech, of a man confined to a wheelchair to “stand up,”  he’s gotten away with shenanigans that would have subjected a Republican to sheer brutality from the media and late night shows.

The same guy who the media found to be too unethical in 1988 to be president is being taken very seriously in 2011 as vice president.  Biden recently said rapes and murders would go up if the congressional Republicans didn’t vote for Obama’s agenda, and he’s being defended by the professional feminist movement and The White House:

The White House on Thursday defended Vice President Joseph R. Biden’s rhetoric that more Americans will be raped and killed if Republican lawmakers reject part of President Obama’s jobs bill that would pay for more police officers on the street.

The remark has sparked fury among some conservative commentators and a direct rebuke from the Republican National Committee, which characterized Mr. Biden’s comments as “irresponsible and mean-spirited” and called on the media and women’s groups to condemn his words.

“No victim of violent crime would ever wish that others were forced to experience the same trauma they went through — especially to make a brazen political point,” the RNC said. “So why would the sitting vice president of the United States?”

But Mr. Biden has shown no signs of backing down and the White House on Thursday contended that the facts were on the vice president’s side.

“It would be hard to find anyone who doesn’t agree with the simple equation that fewer police officers on the street has a direct effect on the crime rate,” said White House press secretary Jay Carney. “That’s the point he was making, and that’s a point that the president absolutely does share.”

Several times in the past week, Mr. Biden has claimed that more Americans will become victims of serious crimes of all kinds if Congress fails to approve the jobs bill.

Imagine Dick Cheney saying this.  Then think about the firestorm he would be hit with making this kind of statement.

A day earlier in Philadelphia, the vice president ridiculed GOP lawmakers for arguing that any perceived benefits of the legislation would be temporary.

“These guys who thought it was temporary, I wish they had some notion what it’s like be on the other side of a gun or a 200-pound man standing over you telling you to submit.”

Conservatives say Mr. Biden’s words were inflammatory and misguided for linking crime rates to government spending, arguing that stimulus money has been spent on many projects that did not improve public safety.

But Mr. Carney said the GOP was missing the point.

“Are Republicans arguing that there is no correlation between the number of cops on the beat and the crime rate?” Mr. Carney asked. “That would be an interesting argument to hear. Yes, we are saying that more police officers on the beat is a good thing and will help keep crime rates lower.”

In Moore County, and across North Carolina, we’ve recently seen how these hiring schemes from Washington work.  The feds send down money to hire “more teachers” and “more cops.”  The politicians get  a lot of great headlines.  One to two years later, the federal money runs out  — these teachers and cops are still employed — and the local and state governments are left with the dilemma of how to keep these people employed.  That’s what the GOP is talking about when they use the adjective “temporary.”

By the way, since when has funding local cop and teacher jobs fallen under the jurisdiction of the federal government?