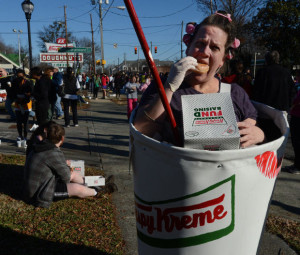 Well, The McClatchy Gang hit us with THIS headline about an event that took place in Raleigh on Saturday:

We also got this gem from McClatchy about a Saturday event in Raleigh:

Hmmm. Quite a busy place on a Saturday. I see from the McClatchy propaganda that William “The Round Reverend” Barber was stylin’ and profilin’ his bad self in our capital city on Saturday.  It’s unfair for McClatchy to assume The RR™ was there for the anti-GOP event.   How does McClatchy know that Barber wasn’t there for the Krispy Kreme event?  Look at him.  You KNOW even The Round Reverend would pick up his pace for some Krispy Kreme doughnuts.

(Note to Mr. Kane, Mr. Frank & co:  Despite what the communications office at NC Democrat Party HQ tells you,  it is neither proper nor fair — in conducting your crowd estimates — to count Barber as more than one person.  )

For the record, the anti-GOP march was coordinated by a group called “Historic Thousands on Jones Street,”  which appears to be run by the usual lefty suspects.  In fact, if you go to this lefty web site  — for the group that fought last year’s marriage amendment vote — you’ll see a picture of a woman who looks A LOT like a woman pictured in The McClatchy story about the anti-GOP event.    (This lefty group is apparently tied closely with Historic Thousands on Jones Street.)
It would be interesting to know how many people — of the low information voter persuasion — showed up for the Krispy Kreme event and wound up in The Round Reverend’s three ring circus.