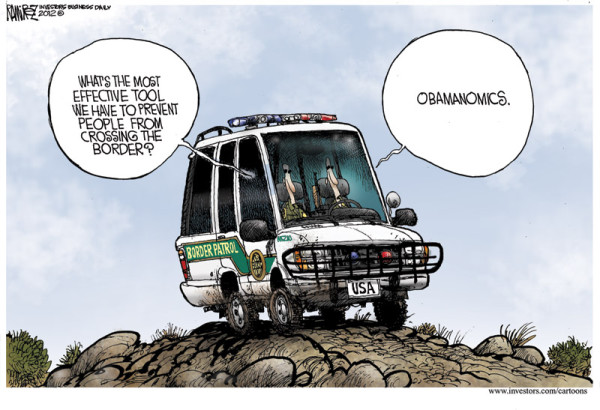 Brace yourselves, folks.  Our nation is getting sold down the river once again by our elected “leaders.”  First, it was the DC-generated housing / financial sector crisis.  Then, it was ObamaCare and the debt ceiling.  Now, here comes “immigration reform” pushed by the so-called “Gang of Eight” bipartisan group.

The “Gang of Eight” plan — whose main supporters include South Carolina’s Lindsey Graham (RINO)  — puts border security way, way, way, way way back on the furthest back burner behind amnesty for illegal aliens.

This past Thursday, the Senate had a chance to change that — putting security ahead of amnesty — with an amendment by Iowa Senator Charles Grassley (R).  the Grassley Amendment basically said that the border would have to be satisfactorily secured for six months before any amnesty efforts go forward.  By   a 57-43 vote, the Senate voted to table the Grassley Amendment.  (For those who may not know, tabling involves setting a bill aside — without even discussing it or voting on it.)   Graham voted to table the amendment, as did North Carolina’s Kay Hagan.  Republican Richard Burr voted against tabling the amendment.

The previous day (Wednesday), we got sold down the river again by Mitch McConnell & co. in the US Senate.  I like the way blogger Robert Stacy McCain (no relation to John) described this move:

Well, we expected this, didn’t we? Thirty Republican senators, led by Mitch McConnell, voted to debate this dishonest monstrosity.

In order to disprove a Democrat lie — that Republicans are “anti-immigrant” and hate Latinos — McConnell will trample underfoot the rule of law and surrender U.S. sovereignty by supporting an amnesty that he and his gutless colleagues will insist is not actually an amnesty.

We need to deport these criminals. Republican senators, I mean.

Political columnist Pat Buchanan tossed in his two cents on the Republican immigration maneuvers in DC:

[…] Americans whose forebears came from Great Britain, Ireland and Germany, Southern and Eastern Europe — the European tribes of North America — have begun to die.

The demographic winter of white America is at hand, even as it began years ago for the native-born of old Europe.

In political terms, this is depressing news for the Republican Party. For nearly 90 percent of all Republican votes in presidential elections are provided by Americans of European descent.

In 1960 white folks were close to 90 percent of the entire U.S. population and 95 percent of the electorate. Nixon’s New Majority was created by pulling Northern Catholic ethnics and Southern conservative Protestants, white folks all, out of the Roosevelt coalition and bringing them into a new alliance that would give Nixon a 49-state landslide in 1972, which Reagan would replicate in 1984.

But since that New Majority gave the Republicans five victories in six presidential elections, four of them 40-state landslides, the political world has turned upside down, and demography is the cause.

Mitt Romney won 59 percent of the white vote, a 3-to-2 victory over Obama among America’s majority. In any year before 1980, that would have meant victory. But in 2012 whites were only 74 percent of those who went to the polls.

Thus, Obama’s sweep of 80 percent of the African-American, Asian and Hispanic vote, one-fourth of the electorate and rising, enabled him to coast to a second term.

Where is America going? What does the GOP future look like?

America’s white majority, 64 percent of the population and 74 percent of the electorate, still declining in relative terms, has begun to decline in real terms. Deaths outnumber births. Among all U.S. births in 2012, white babies were outnumbered by babies of color.

If Republicans are opposed to what mass immigration is doing to the country demographically, ethnically, socially and politically, there are, as Reagan used to say, “simple answers, just no easy answers.”

Those answers: No amnesty, secure the border, enforce laws against businesses that hire illegals, and impose a moratorium on new immigration so wages can rise and immigrants enter the middle class and start voting as did the children and grandchildren of the immigrants of 1890-1920 by 1972.

So what are the Republicans doing?

Going back on their word, dishonoring their platform, and enraging their loyal supporters, who gave Mitt 90 percent of his votes, to pander to a segment of the electorate that gave Mitt less than 5 percent of his total votes.