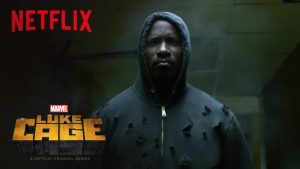 I remember Luke Cage from my early pre-teen days as a comic book junkie.  If I recall correctly, he was the first black superhero Marvel put out there. The Cage character had been off my radar for decades until I heard Netflix was producing a series based on him.

Hmmm.  A black superhero in the era of Obama and Black Lives Matter.  *THIS ought to be rich.*

So, I checked in on the first episode to see how long it would take for my “white guilt” to show itself.  Boy was I thrown for a loop.

Think ‘Dirty Harry’ with an all-black cast and Harlem as the setting.

Villains.  Hollywood’s usual M.O. is to make a villain a rich white capitalist destroying the environment and / or victimizing women, children and minorities. In Luke Cage, the villains are (1) a scummy murderous drug dealing (black) gangster, and (2) his cousin, a shady (black) NYC city councilwoman running an even shadier green energy scam.

The swear jar.  Cage’s mentor, Pop, runs a barber shop in Harlem.  He has a moratorium on swearing within the confines of his business.  If you swear, you are required to put money in the swear jar.  (There is SOME swearing in the series, but it’s mostly from the bad guys.)

Themes.    Besides the swear jar, Pop makes a big deal out of his employees wearing smocks and maintaining a professional demeanor while at work.  “It’s important for these young kids out there to see a man, in uniform, putting in a hard day of honest work,” Pop tells another character in the show. 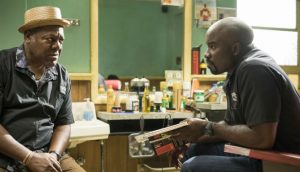 Pop, Luke and several other characters keep making the point that you can’t wait around for the government to take care of you.  Neighbors need to reach out and help each other.  Neighbors and friends need to look out for each other.

Pop reminisces about the decline of Harlem.  He tells his friends that he saw the beginning of the decline right about the time “the fathers” disappeared from the households.

I’ve already made it through episode 7.  There was great potential for the Black Lives Matter crowd to hijack this.  (They MAY still.)  But, as it is, this is one piece of visual entertainment that is worth supporting.