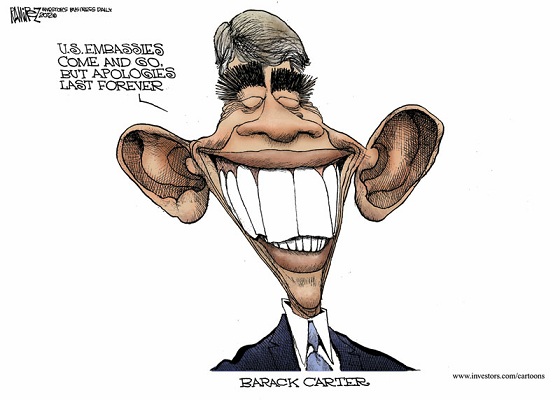 The 1970s were a hellish decade for  this country.  Inflation out the wazoo. Skyrocketing gas prices. Oil embargoes.  Record unemployment.  Communist aggression rampant around the globe. The rise of radical Islamists. An exploding welfare state.  Bell-bottom jeans.  Hippies. Disco.

Sure, That 70s Show made it look like a fun time to live in.  But for those of us old enough to remember it — not many want to go back.

Since 2008, it’s been pretty easy to see parallels to the late 70s.   In both cases, we had little-known Democrats coasting into The White House promising us hope and change.  In both cases, we’ve had economic policies implemented that caused the economy to crash, unemployment to rise, and gas prices to skyrocket.  In both cases, we’ve had Muslim fanatics openly disrespecting the United States. In both cases, In the 1970s, we had Leonid Brezhnev guiding The Soviet Union in its world tour of terror.  In the 21st century, we’ve got Vladimir Putin making Brezhnev look up from the deepest darkest pits of Hell to beam with pride.

During the Carter years, the Iranians overran our embassy, held our people hostage, and suffered few if any repercussions for it.  In the Obama era, al Qaeda overran a US diplomatic mission in Libya, and killed our people — who fought bravely to the end despite Washington’s refusal to provide backup.

Carter turned over the Panama Canal – -a key strategic asset for the US — to the Panamanians.  Obama is turning over the bureaucracy that administers the Internet to the United Nations.  *Considering the rogue’s gallery in the United Nations, what could possibly go wrong with that?*

In the election of 1980, America corrected the horrible mistake of 1976 by electing a Republican president promising a radical departure from the nightmare of the reigning Democrat administration.  In 2012, however, the Republicans decided to put up a candidate who offered a kinder, gentler, slightly-smaller version of what we already have.

The media and their leftist fellow travelers guffawed themselves silly over THIS line offered by the Teleprompter-Reader-In-Chief during a 2012 debate with Mitt Romney.   Dear Leader could not believe that anyone was still considering Russia a threat. Meanwhile, Russian organized crime is cornering the world markets on drugs, credit card fraud, and pornography.  A good chunk of cyber-crime hitting Americans and their businesses originates from Russia.  Russia has been pumping arms into the hands of all kinds of violent troublemakers in the Middle East. Even some who take hostages and hijack aircraft.

Putin used his military to bully the democratic-minded, western-oriented people of Georgia, and is doing the same now to the people of Crimea and The Ukraine.  Some may argue that the Ukraine situation is not a threat to us.  Well, we sat back and ignored the Soviets as they gobbled up Eastern Europe.  They kept going.  They went as far as putting missiles in Cuba — 90 miles off our shore.

Russia has NEVER played nice with others.  (They sided with us in World War II only because Hitler double-crossed Stalin and invaded the Soviet Union.  Hitler and Stalin started off as allies.)  Anyone who thought they were going to suddenly become good neighbors when the Iron Curtain fell in 1989 was smoking some of that really good Jamaican stuff.

To many of us who lived through Carter — and the corrections of the Reagan era — this is looking a lot like the return of a bad dream.  Ronald Reagan stepped forward to help lead us out of the 1970s mess. But where is that Reaganesque leader now?  Where is that hope-filled message of limited government, freedom, pride in America, and personal responsibility that helped us turn around in the 1980s?