I HATE giving publicity to the WRAL-Goodmon-hammer-and-sickle empire.  But Goodmon errand boy Rob Schofield HAD to throw my name into an exaggerated, hysterical, factually-impaired rant against The Carolina Plotthound and some other conservative blogs.

For those who don’t know, The Plotthound is a Drudge Report-knock-off news aggregator owned by the folks at Civitas and John

Locke.  I liked it when Paul Chesser ran the show.  Well, Paul left. And Pope consigliere John Hood decided to group me and this site with Satan in the category of Those-whose-names-shall-not-be-spoken.

So, since then, we’ve been two ships passing in the night.

Rob gets the nature of my problem with The Plotthound totally wrong:

[…] Still more (somewhat ironic) confirmation comes from a May, 2016 story that appeared on The Daily Haymaker — another ultra-right-wing site run by a fellow named Brant Clifton that frequently attacks the Plott Hound for what Clifton feels are its insufficiently conservative positions.[…]

Not even close.  Plotthound doesn’t really take positions.  Hood and the Pope

empire have disappointed me by, on several occasions, forsaking conservatism for the alleged manna associated with”Republican” control.

Apparently, Rob thinks I am obligated to “disavow” The Plotthound (or maybe even The Triad Conservative. I don’t know). Rob attacks the guy at Triad Conservative for being “anti-semitic” because he dared to mention the name “Josh Stein” and the word “Jewish” in the same sentence. 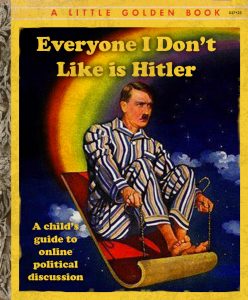 Ethnicity and group membership are so important to lefties. Try to bring it up as a conservative, and YOU, SIR (or MA’AM) are a bigot.

As, part of his prosecution of The Triad Conservative, Rob hauls out the Southern Poverty Law Center(SPLC) as his prime witness.   The SPLC will label you a “hater” or a “hate group” if you dare to do something like, say, speak out against gay marriage or trannies in the ladies room.

You may remember the shooting rampage at the offices of The Family Research Council in 2012.  The FRC is a mainstream religious conservative lobbying group.  The SPLC labeled them a “hate group,” and a leftist kook decided to run with that and shoot the place up.  A security guard was killed as a result of the rampage. 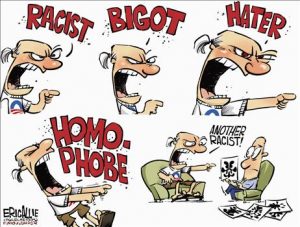 The SPLC has no credibility.  Rob – and all other liberals – should hang their heads in shame for even citing them.  THEY have blood on their hands.

Rob speaks for Chapel Hill, Carrboro, Durham, parts of Charlotte, Raleigh and Asheville.  (You know — all those places where those late night votes for Roy Cooper appeared in November.) The site he and Chris Fitzsimon run — funded to the hilt by the owners of WRAL — is loaded with slimy attacks against people who simply want to work hard to support their families and raise their children right without having the Marxist and radical homosexual agendas crammed down their throats.

If you want to play Rob’s game, you could start up an effort to have WRAL disavow and divest from Rob and Chris’s lefty mudpie fight.  Though, I say keep ignoring WRAL and Rob and Chris, and let the market finish them off.