He was once the chief law enforcement officer for our state.  Now he’s our governor.  and HERE he is on Twitter: 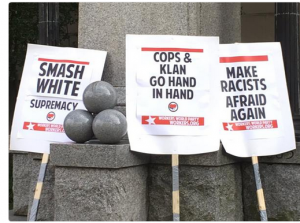 Soooooo — endorsing mob violence now, are we?  (In case you’ve had your head in the ground for the last 24 hours, a bunch of Roy Cooper voters did THIS in Durham.).

We can complain about an unwashed “artist” dropping a crucifix in a jar of pee and getting a government grant for it.  We BIGOTS, we’re told, just need to shut up and deal with it.  (*We need to develop an appreciation for art.*)

Encouraging people — especially those nutcases in Durham — to go out in force on the streets to take matters into their own hands is a dangerous, dangerous thing. The recently former chief law enforcement officer of the state should KNOW BETTER. 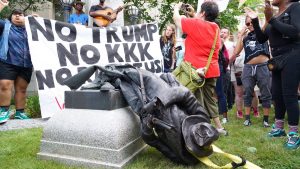 ria and Afghanistan — is a go-to move for fanatical authoritarians. Leftists are famous for blaming other people for the failure of their policies.  High unemployment and crime? Poor economy? *It’s all the fault of The Confederate States of America.*

The biggest threat to our civilization is NOT a few wackos hiding out in the woods wearing white hoods or kooks in Durham waving commie flags.  It’s authoritarianism.  People with power and influence wanting to snatch your freedoms, and to punch you in the face if you dare to disagree with them.

16 thoughts on “What’s a little vandalism between friends?”