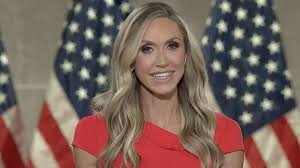 That’s what a poll for our reportedly vacant US Senate seat in 2022 suggests:

President Trump’s daughter-in-law, Lara Trump, is currently the favorite among North Carolina voters to succeed in the 2022 Republican primary for the seat of retiring Sen. Richard Burr (R-N.C.), according to a BUSR/UNLV Lee Business School poll released Monday.

The poll found that Lara Trump, who is reportedly considering a Senate run, leads former North Carolina Gov. Pat McCrory (R) 24 percent to 23 percent, though this is within the poll’s 7-point margin of error.

The leads by Lara Trump and McCrory far surpass support for Rep. Mark Walker (R-N.C.), the only major candidate so far to launch a campaign for the Senate seat. The congressman polled at 7 percent among North Carolina Republicans surveyed.

About 39 percent of those surveyed were undecided on their favorite for the Republican Senate primary.

The same poll also found that in the 2024 North Carolina Republican Presidential Primary, President Trump leads among voters with 76 percent support, ahead of former U.S. Ambassador to the United Nations and former South Carolina Gov. Nikki Haley (R) at 6 percent. […]

McCrory’s inclusion is the Meck Mafia’s way of getting another of their own into the Hill’s upper chamber.  They already have Tillis.  Conservatives ought to remember how McCrory’s one gubernatorial term went and think about whether they want the same ol’ stuff in DC for SIX YEARS.

I’d consider Lara Trump.  From what I’ve seen of her,  she seems like a nice person.  (She certainly outshines EVERYONE in that poll.)  She gave some great speeches in defense of her father-in-law.  But I worry about a repeat of the Elizabeth Dole debacle.  I think — if Mrs. Trump is serious about this race — she and her husband should establish residency within our borders.  Get to know the place.

I also believe we need to hear more about where SHE stands on the issues.  It’s not safe to assume that everyone in a family agrees on politics and the issues.