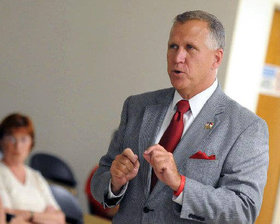 Drip-drip-drip.  The sordid details surrounding Speaker Thom’s staff  are treating Raleigh Republicans to the worst kind of Chinese water torture.  They took power in 2010  promising a different environment than what their predecessors offered.  Considering some of the stories coming out of the speaker’s office, it’s like Richard, Jim, Joe, and Marc NEVER left.

(In that hubbub, Speaker Thom let slip that up to FIVE employees on his staff were rumored to be involved in “inappropriate relationships.”  Still no word if those were anything more than rumors.)

Then, we learn that the two “resigned” employees got pretty substantive severance payments out of state tax coffers.   Severance pay for employees who “resign”?

In today’s N&O, Speaker Thom talks to The N&O and attempts to dig himself out of a very deep hole:

Amid calls for him to use taxpayer money differently, State House Speaker Thom Tillis on Thursday stood by his decision to pay two former top staffers an extra month of salary after they resigned over improper intimate relationships with lobbyists.

Separately, the N.C. Home Builders Association said that it paid no extra money to its lobbyist, Jessica Hayes, who had also resigned after the revelation last month that she was in a relationship with Tillis’ chief of staff, Charles Thomas.

“She did not receive any severance or payment in lieu of … notice,” said Mike Carpenter, general counsel for the home builders.

That’s in contrast to the authorization by Tillis of $12,500 for Thomas and $6,833.33 for former policy adviser Amy Hobbs, who also acknowledged an inappropriate relationship with a lobbyist.

The money was paid to both former employees on Friday; Tillis said it would aid them in their abrupt departures. Thomas resigned April 27. Hobbs’ last day was May 4.

“I recognized that their jobs and careers were forever affected by their choices,” Tillis said in a statement Thursday, “and that serious family obligations still existed for each of them. I stand by my decision to accept their resignation while recognizing the difficult transition period they are now entering.”

Tillis, a Republican from Cornelius, told The News & Observer for a report in Thursday’s editions that he wanted to take into account the “human side” of the situation.

State laws and rules did not require that any payments be made to the staffers.

The listed purpose of the payments was “pay in lieu of notice.” An explanation of that provided to the N&O by the speaker’s office references a British law that allows workers there to receive payments when dismissed.

Democrats and a special interest group Thursday both urged Tillis to find other ways to pay his former staffers.

The state Democratic Party called the money a “golden parachute” that was equivalent to the annual pay of a teaching assistant. The party said Tillis should use campaign money to pay his former staffers.

Progress North Carolina, a nonprofit that has sought to bring attention to cuts in education funding, said Tillis should cover the cost himself.

“Speaker Tillis ought to reimburse the state out of his own pocket for this egregious abuse of the taxpayers’ money,” said Gerrick Brenner, the group’s executive director.

Gosh, it warms my heart to see leftists so concerned about how taxpayer money is spent.   (If ONLY their concern stretched beyond Republican staff human resource issues …)

Tom-with-an-H has taken the focus off of Jay Parmley and David Parker.  He’s given the left side of the room a morale boost in a year that has been looking like an all-but-inevitable landslide disaster for them.  Nice going.

I’ll have to admit Brenner does make an interesting observation.   Read On:

Records show the initial paperwork for the business was filed in February, while Thomas was still chief of staff for Tillis.

In an interview, Thomas said at the time he was only reserving the name of his company, Third Reading, for future use. He acknowledged that government consulting was a natural path.

Tillis, who shared a Raleigh apartment with Thomas since last fall, told reporters Thursday that he was unaware of the consulting firm until this week.

“To my knowledge, he filed for an LLC, but I don’t think he did anything until he was officially severed from the state,” Tillis said.

Republicans in leadership positions were silent about the payments Thursday.

Reached by telephone, House Republican leader Paul “Skip” Stam of Apex said he did not know anything, then hung up. He did not answer a return call.

The GOP speaker pro tem, Dale Folwell of Winston-Salem, said he was attending to a family matter and could not comment.

The state Republican Party directed a request for comment to Tillis’ office.

Harry Truman once spoke about how rough political life was, noting that if you want a friend, you need to get a dog.

A couple of Jones Street insiders tell me the best way to know if you are in BIG TROUBLE is if Paul Stam clams up and starts avoiding you — leaving you hanging out there.  (Kinda like what ol’ Paul is doing to Tom-with-an-H right here. )