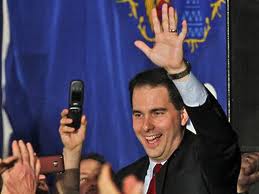 Wisconsin Governor Scott Walker went toe-to-toe and nose-to-nose with the left wing’s nastiest, most ruthless elements and came away a winner.   Walker got pounded in the media about his push for cuts in entitlements and other state spending.  Instead of waffling, and backing off and compromising, Walker stood his ground, took his case to the people and got vindicated.

Contrast that with what we’re getting here in North Carolina.  Voters gave Republicans clear majorities in both chambers of The General Assembly.   The  new majority started off well — pushing through wildly popular legislation like Voter ID and a repeal of the Racial Justice Act.  Enter Lame Duck Bev and her vetoes, and all that courage by the majority on Jones Street appears to have melted away.

The late U.S. Senator Jesse Helms was renowned for standing firm on his conservative principles.  He got a lot of votes from people who didn’t necessarily agree with him down-the-line, but appreciated the fact that “you always know where he stands.”  As you may know, Senator Helms retired, undefeated, after 30 years in the U.S. Senate.

In politics — like life — you can’t get EVERYBODY to love you.  But it’s much easier to win RESPECT from a great majority of people you encounter or interact with.  Identify some basic principles you will stand and fight for.  Then, fight for them.   The media and their leftist comrades will beat on you.  But you will gain respect from people around you.