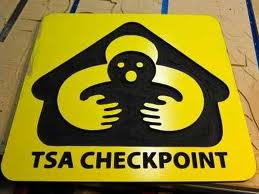 Hijackings and other mid-air craziness have turned flying into way too much of an adventure.  The horror of 9/11 added a whole new dimension.  Fanatics were willing to take over planes full of people and crash them into buildings.

Justly, we went after the terrorist scum who perpetrated those atrocities.  But Washington — as they so often do — decided to really sink their claws into the situation as a way of, um, protecting us.  A new federal agency, the TSA, was created.  It was unionized and populated with the same kind of folks you see “working” at the post office or DMV.

Of course, political correctness seeped in.  We can’t make those Muslim folks feel so sensitive now, can we? Never mind that most folks who try to take over airplanes have allahu akbar  as a frequent staple of their vocabulary.   We’re all being made to take off our shoes and belts and empty our pocket while trying to board an aircraft.  And you have to redress yourself while walking in a constantly-moving line of people. Grandmothers and nuns get frisked.  Even children do.

A regular reader of this site from Craven County wrote in to us to talk about her family’s recent experience with TSA: 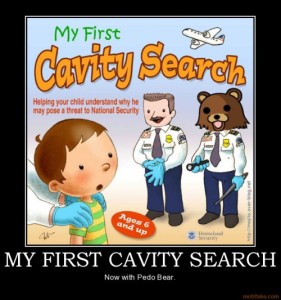 son, his wife, and our granddaughter.  Since we wanted to look well

dressed for meetings, I packed carefully with tissue paper in the folds

of clothes.  We passed through Paris and landed in Turin, collected our

bags, and when I unpacked, my clothes were still neat.  I hung them up

and didn’t even need to press anything before I wore it.

Contrast that to our return to the states.  We landed and went through

customs in Detroit.  When our bags were released, we collected them and

checked them through to D.C.  We spent the night in the D.C. area before

driving home to New Bern.  When I opened my case, I was greeted with

chaos.  A bottle of lotion was broken and smeared over a number of

things.  It looked as if all the contents had been scooped up a number

of times, then tossed willy-nilly back into the bag, then squashed down

in order to close it.  Shoes were not in pairs on the bottom anymore,

but in among the clothes, and one shoe had the toe bent at a ninety

It would be interesting to know what probable cause existed for this woman’s suitcase to be ransacked like this. This lady — as you can tell from her narrative — is an upper-middle class grandmother.  Not exactly a screaming jihadi.

Don’t we have some protection from “unreasonable” search and seizure in that Constitution thingie?

Don’t we have all kinds of high-tech screening machinery in place to see through suitcases and sense chemicals, explosives, etc.? Pre-9/11, air travel was already a major nuisance and a hassle.  Now, it appears we have to tolerate the man-handling of our personal property AND our constitutional rights.

I am all for going the extra mile to root out terrorists and keep air travel safe and secure.  But we need to weed out all of this PC crap and let law enforcement honestly target the people who are most likely to be doing bad things.

One thought on “The TSA: harassing grandmas, nuns, and babies since 2001”