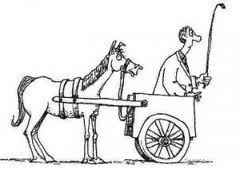 For months, The Pilot beat us over the head with exaggerations, half-truths and outright lies generated from the propaganda machine fighting the proposed marriage amendment to the state constitution.  We got a flood of letters against the amendment filling the op-ed page — even though the paper had NEVER printed the full text of the proposed amendment. We got blow-by-blow updates and breathless, fawning coverage of anti-amendment forces efforts seeking the arrest of a West End housewife for removing THREE campaign signs from the side of a highway.     The paper had allowed itself to become a vehicle for the anti-amendment forces.

Now, this week, we got reporter / repeater Tom Embrey throwing the text of the amendment in at the end of a story about the West End housewife.   (Still waiting on that article explaining how the actual text of the amendment squares with all of that — ahem — stuff The Pilot has been disseminating for months.)

Today, we get a GREAT, MUST READ article by Robert Deucher explaining THE FACTS about the proposed amendment.  After months of one-sided biased reporting and half-truths on the amendment, a little bit of journalism is sneaking in.

The environment of misinformation and vitriol The Pilot has helped create is tragic.   (I saw a Facebook status of one local resident, likely a Pilot reader, which said: VOTE AGAINST THE FIRST AMENDMENT. IT’S IMPORTANT!)

I hate to tell you, but I don’t think we’re going to get a vote on that one.

Journalism SHOULD involve presenting ALL of the facts on an issue to the readers THEN providing analysis and commentary.  The Pilot has bombarded us with falsehoods and propaganda, and now is trying to sneak some truth in here at the end.

This cart-before-the-horse phenomenon in The Pilot newsroom also reared its head in the coverage of The Second Congressional District primaries.  This particular election is really important.  For the first time in over  decade, Moore County is in a new district.  Folks don’t know the candidates, and need some extra information.

Instead of in-depth coverage, we got an unsigned endorsement of Ellmers on Steve Bouser’s op-ed page.  Then, we got a mushy, sympathetic signed column by Bouser that SHOULD BE listed as a campaign contribution on Ellmers’s reports to the FEC.  Today, we finally get some in-depth coverage of the race — written by Managing Editor David Sinclair.  Sinclair is easily the most even-handed, professional writer I’ve seen grace The Pilot’s news pages since I moved to Moore County a decade ago.  (Sorry, Dave.  That endorsement is likely a kiss of death to your career.)

It would have made sense to provide COVERAGE of the race FIRST.  Then, provide the analysis and the endorsement.  This cart-before-the-horse approach is sloppy and gives the appearance of trying to shove a political agenda down the readers’ throats.  (And we KNOW THAT is not going on, don’t we?)