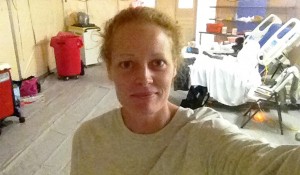 Here at Haymaker HQ, we are still scratching our heads over this one.  A nurse named Kaci Hickox went to west Africa to help ebola victims.  She comes home — after being exposed to this terribly fatal disease — and is pissed off that authorities want to ensure that she doesn’t infect all of her friends and neighbors with it.

She claims that she feels OK and doesn’t need to be isolated from everyone.   Dr. Craig Spencer, of NYC, thought he felt fine when he came home from Africa and roamed all over his hometown, coming into contact with hundreds, if not thousands of people.  He is now being treated for ebola.

It’s hard to understand how someone — clearly feeling a lot of compassion for people suffering from ebola — would have so little compassion for her fellow Americans, protecting THEM from ebola,  when she comes home.  One writer at National Review describes Ms. Hickox as ‘selfish’:

[…] For individuals who in their service abroad exemplified Americans’ generosity of spirit, Hickox and Spencer have demonstrated a shocking lack of it since returning back home. Strictly monitored house quarantine — de facto house arrest — is undoubtedly an abrogation of civil liberties. But 21 days of it — lavishly state-funded — to be followed by perfect liberty assuming no problems, seems like a minimal sacrifice to ask of those who put themselves voluntarily in danger. When it comes to a disease that liquefies your internal organs and pushes blood out your eyeballs, “Better safe than sorry” would seem a dictum to which everyone could agree.

So why Hickox’s dissent? There is, first, her insistence on her own wellness: “I remain appalled by these home quarantine policies that have been forced upon me even though I am in perfectly good health and am feeling strong.” That is reassuring — until she suddenly stops feeling strong and is diagnosed with Ebola. The medical consensus is that a person is likely to be free from the threat of an Ebola onset 21 days after being in contact with the virus. Hickox’s six healthy days since leaving Sierra Leone are encouraging, but it’s a long while until she is out of the woods.

Second, she has said that she will “self-monitor” and report to the hospital if she believes herself symptomatic. But that claim is far from credible — first, because of Spencer’s example, and second, because of her demonstrated disdain for the state’s medical protocols. Does she really expect public-health officials to believe that, if she starts to feel weak and achy, she will immediately submit to their aggressive orders — like, you know, quarantine not in her own living room?

It is a peculiar and repulsive sense of entitlement that is on display in Fort Kent. That a hero abroad can be a menace at home can be, it turns out, rather true of both generals and general physicians.

2 thoughts on “That Ebola Nurse”